If I am at an event where they are serving beer, I commonly make the joke that it is my favorite kind. People often question that statement and I have to explain that my favorite kind of beer is free beer. Everyone likes free stuff. But I am a firm believer in the TANSTAAFL principle – there is always a cost somewhere.

In the world of computer software, free stuff is definitely popular, but may not always be the best choice …

Most people do not have extensive experience of sourcing and purchasing software and, equally, have no appreciation of the time and effort required to design, write and support a useful program. So, I guess it is not surprising that I frequently hear people saying that they like getting apps for their phone/tablet, but firmly reject the idea of paying for them. It is fair to say that there are countless free apps out there, but, in almost every case, the TANSTAAFL principle applies. “Free” apps broadly fall into 4 categories:

The app smartphone/tablet marketplace reminds me of a popular software distribution/licensing system used in the ’80s and ’90s: shareware. The idea was that a small software company would release some software of professional quality and with good support. It could be obtained at zero [or very low] cost and users were encouraged to copy [share] it and pay for it if they found it useful. It was an honor system, which relied on users’ appreciation that software does cost money to develop and support. Some shareware would nag users to pay; other programs just silently did their job. 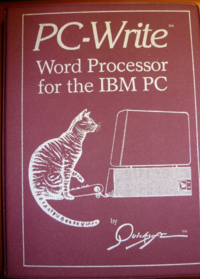 An early, and now iconic, example of shareware was the PC-Write word processor, which was released in 1983 and I recall with some affection. It could be used indefinitely for free, but users who paid the fees would receive a very nice printed manual, which was well known for its pictures of cats. The company seemed to do quite well with this business model until it was over-taken by technology and went out of business in 1993. A sad association with PC-Write is that the first PC Trojan masqueraded as PC-Write version 2.72 [there never was a real version 2.72]. I read an article, which reminisced about PC-Write and said that anyone who can remember using it is officially old. Well, that put me in my place! I found a site from where I might download a copy of PC-Write and was tempted to see whether it would run under Windows 7. The site specialized in making available obsolete software, which it terms “abandonware”.

The expectation of something for nothing is incredibly strong when it comes to services delivered via the Internet. The number of times I have heard someone say “Why should I pay for this?”, when the answer is that the service addresses a real need and costs money to provide. Like apps, free websites [i.e. those that do not have an explicit, subscription charge] fall into a number of categories:

I guess it is because I have worked in software all my adult life, but I truly appreciate the value of so much of the technology around us. I happily use many paid-for apps. Over the years, I have registered numerous shareware programs. And, nowadays, readily consider donations when a Web service is truly useful to me. This week I made a modest donation to Wikipedia and would encourage you to do so [you may find your employers will match your donation too], as I would miss it on a daily basis if it ceased to be available.

Security of Medical Devices – A Changing Regulatory… March 2, 2022 Over the past two decades, medical devices have been increasingly likely to be connected to the outside world using Wi-Fi,…
Medical Devices MUST Be Secure September 24, 2021  I recently had the opportunity to present in a Webinar focusing on security needs of medical devices along with Patrick…
Quality Considerations of Open-Source Software for Medical… January 17, 2022 Traditionally, software intended to run on a medical device was expected to be written by companies well versed in writing…

This article first appeared on the Siemens Digital Industries Software blog at https://blogs.sw.siemens.com/embedded-software/2014/11/27/there-aint-no-such-thing-as-a-free-lunch/