This is the first in an occasional series of postings with the title “Six of the Best”. This phrase is probably meaningless to many people outside of the UK and Australia and it is quite old fashioned here. It referred to the practice of punishing children with six lashes of a cane – a practice that is, hopefully, now consigned to history. However, I am not going to talk about corporal punishment.

This series is about my six favorite things in various categories. This time, it is apps on my iPad …

As I have written about before, I have been an enthusiastic iPad user since they first came out. Apart from the built-in apps that I use [sometimes because I have little alternative] there are always a few apps that I find myself using just about every day. These change from time to time, but here are my current top 6 go to apps:

Adopting a cloud-based way of working has many advantages. Primarily it means being able to access and update information where ever you happen to be, probably using multiple platforms to achieve that. For me, the ability to synchronize data, so that I can work offline, is essential. I use Evernote for a great many purposes, both personal and professional. 90% or more of that work is done on my Windows PC, but the iPad app [and the one on my iPhone] are invaluable. This is instrumental in my iPad almost completely replacing my laptop when I am traveling.

I like Facebook for keeping in touch with friends and family and have found the app to be just a bit better that the website on the iPad screen. The separation of messaging from the main app is so ridiculous that it might make me look for a different strategy going forward.

I share a Google calendar with my wife. I need an app on my iPad [and iPhone] that syncs with the online data so that I can still access/update the calendar when I have no network. I have never really found the built-in iOS calendar app very satisfactory for various reasons. One thing is that it does not support a 2-column, 3-row week layout, which suits me. I have tried various apps, as I have yet to find one which is 100% ideal, but my current favorite is Informant.

I like to be kept informed about the news and up to date on various subjects, both professional and personal. I do not read newspapers or magazines, rarely watch TV and only catch snippets of radio. I rely on the Internet to provide the information that I need. For a long time I used Google Reader to follow RSS feeds, but, when that was canceled, I looked for an alternative. I found NewsBlur, which has a web app that I use on my desktop and an iPad app. They are suitably synchronized so that a story that I have read on one platform is shown as read on the other. 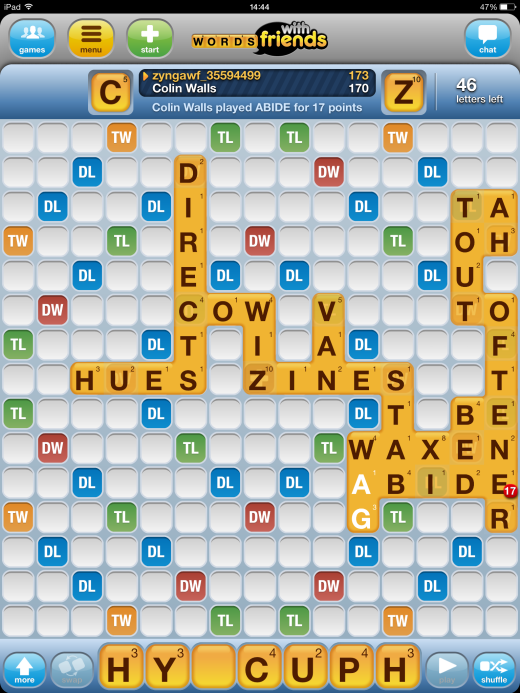 I love reading and, having converted almost 100% to e-books, my Kindle is my faithful traveling companion. My Kindle is an old-school model, with no back-light. Most of the time that is not a problem, but sometimes [in bed for example] I might have slightly subdued light which makes the Kindle challenging, but I always feel that the amazing battery life and readability in bright sunshine are great compensation. I could get a new model [PaperWhite], but I am wary in case the battery life is shorter and sunshine visibility compromised. My solution is to use the Kindle app on my iPad. The app and the Kindle itself stay in sync, so I can start reading on one device and pick up exactly where I left off on the other. Although my [old] Kindle does its one job very well, I do like some of the smarter features of the iPad app.

I enjoy playing games with other human beings, but I am less keen on competing with a computer. So my favorite iPad game app is Words with Friends. It is essentially an online Scrabble game that I can play with anyone on the Internet. I only play with people that I know and typically have 4-6 games on the go at any given time. Some people give me a very stiff game, so it is a particular pleasure when I beat them [once in a while].

Over time, my favorite apps will change. I do not swap things and constantly download new ones to test out, but I am open to innovation. I am still using an iPad 3, having resisted the attractive lighter weight of the iPad Air. I am holding out for the iPad Air 2, which is rumored to be lined up for announcement next month.

Medical Devices and the FDA, a History of Change August 26, 2022 As you probably know, devices of all types continue to get more complex, more interconnected, and in the world of…
OFF-TOPIC: Expectations vs reality January 14, 2021 I am of the opinion that disappointment is an underrated emotion. Many people do not see to take it seriously.…
OFF-TOPIC: Musing on handedness January 28, 2021 I have always be fascinated by the concept of being right- or left-handed. Almost all of us have this asymmetry…

This article first appeared on the Siemens Digital Industries Software blog at https://blogs.sw.siemens.com/embedded-software/2014/09/18/six-of-the-best-ipad-apps/