I like wine. There is at least one person in my life who might think I like it a bit too much, but I think that I will put that thought to one side. At the weekend, I can think of no better accompaniment to many meals than a splosh of something red in a glass. When I was much younger, I thought that it might be interesting to build up a wine cellar and develop some expertise in wine matters. However, over the years I have discovered that it is much simpler to just get wine when it is needed [but obviously keeping a couple of dozen bottles on hand to be sure] and I have never owned a house with a cellar. I have also managed to avoid becoming a wine expert; I know just enough to be able to select something off a shelf or a list with reasonable confidence. I had a friend, who developed such a fine wine palate that he found any wine under $100 a bottle undrinkable. As he was not a multi-millionaire, he could not afford to drink wine very often, which rather spoiled his pleasure. I have avoided this problem.

Apart from drinking the stuff, I am interested in some of the culture and rituals associated with wine …

There are two aspects of wine drinking that some people find a little daunting: opening the bottle and tasting wine. Both of these have some mystique associated with them which is worth unpicking. Today I want to think about the bottle opening issue; I will save tasting for another time soon.

Nowadays, getting wine out of a bottle is often a very simple process: unscrew the cap and pour. Many traditionalists have a negative view of screw caps, but I am totally in favor of them. Modern wine is commonly designed to be drunk quite young and has been fully matured and is ready to drink before being bottled; further aging would tarnish it, so an air-tight seal is ideal. It also reduces the temperature sensitivity of the wine, which is good news, as most of us do not have a wine cellar at our disposal.

Plastic “corks” have appeared in recent years. They are intended for use with modern wines, instead of a screw cap. They have been introduced for two reasons. First, it is a slight nod to traditionalists who enjoy the cork extraction process – I think that they like the “pop” sound. Second, and more importantly, it means that producers can apply an airtight seal to bottles without investing in new equipment. Personally, I find them annoying. Why make the wine harder to get to than necessary?

Lots of wine is still shipped in bottles with traditional corks. For “fine wine”, which benefits from some bottle aging, a natural cork is ideal, as it allows ingress of a minuscule amount of air, which facilitates the slow aging process. With cheaper wines and those intended to be drunk young, the cork is an anachronism. 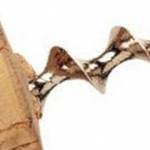 Extracting a cork is simple enough. All you need to a corkscrew. Other methods of removing a cork are generally inadvisable or even dangerous [as someone close to me would attest – he has the scars]. Choosing a corkscrew should not be hard – there are countless products on the market. It is important to reject any that have a screw which is not a simple helix – typically these useless tools look like a wood screw, as shown here. These can make a mess of even a slightly imperfect cork and almost always eject pieces into the wine itself. 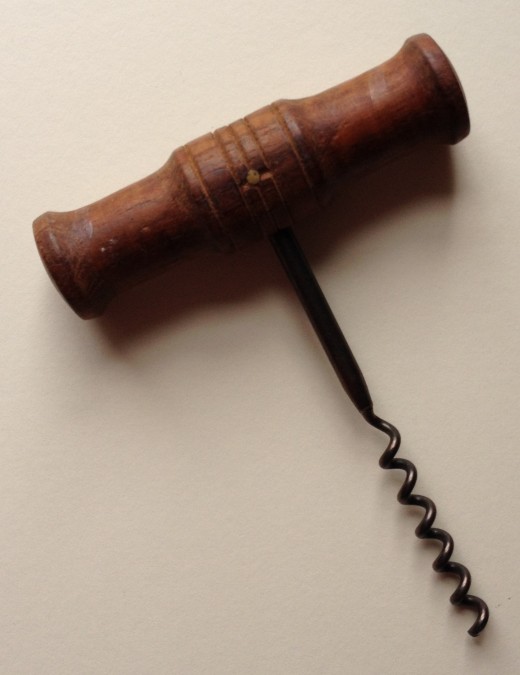 Simple tools are usually best and my oldest corkscrew [which I have had for more than 30 years] is as simple as you can get. It is just a nice, comfortable, wooden handle fitted at right angles to a long helical screw. It can take some effort to pull out a cork, particularly if it is old or the wine is a variety with a tiny amount of sparkle [as the cork will have been inserted using pressure]. 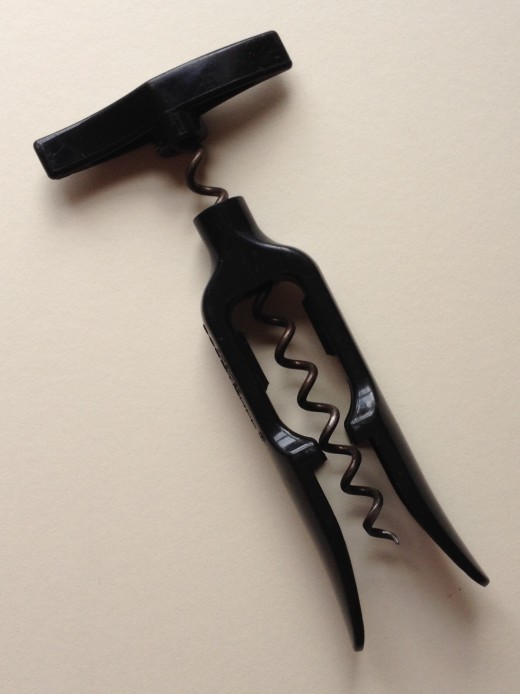 To reduce the effort in extracting a cork, two different mechanisms have been developed. Either the screwing action is used to pull out the cork or extra leverage is provided. This black device applies that first idea. The plastic collar is placed around the top of the bottle, resting on the glass outside of the top of the cork. You then just screw into the cork and keep going. In due course, the cork rides up the helix and pops out of the bottle. More sophisticated versions of these have a cork rejection mechanism, but that is just a luxury.

The more traditional way to ease cork extraction is using leverage. Various varieties of “barman’s friend” are available; my two are shown below. The idea is that you screw into the cork and then hook the leverage point [shown with a red arrow] on the top of the bottle and use the body of the device to lever out the cork. The black one has a single leverage point. 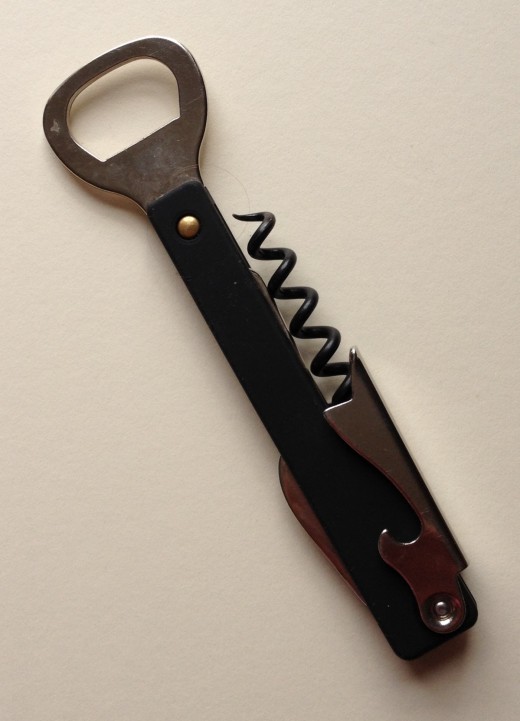 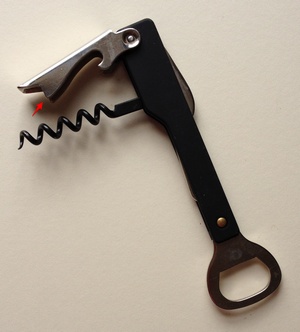 The green one [my current favorite – bought on a visit to a nice little winery near Seattle] has two leverage points, which enables it to be smaller and takes it less effort, but means the cork is necessarily extracted in two steps. 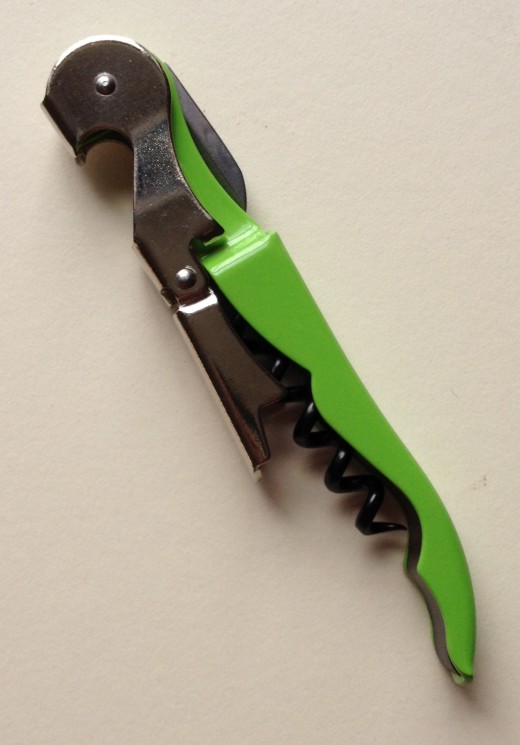 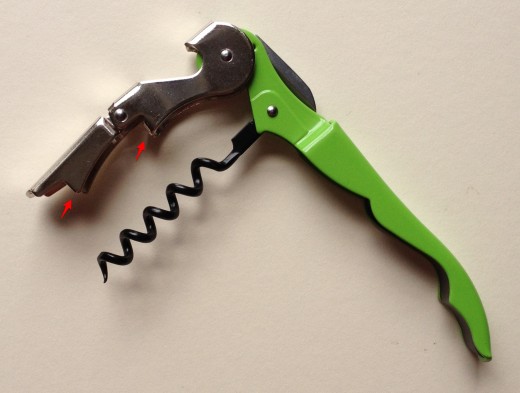 BTW, most corks are covered by a metal foil or wax cover called a “capsule”. This should be removed entirely or the top be cut off before attempting to remove the cork. Do not try to pull the cork out through the capsule.

I saw an e-card recently, which I enjoyed, where a woman is saying: “If I ever go missing, I would like my photo put on wine bottles instead of milk cartons. This way my friends will know to look for me.”

Medical Devices MUST Be Secure September 24, 2021  I recently had the opportunity to present in a Webinar focusing on security needs of medical devices along with Patrick…
Quality Considerations of Open-Source Software for Medical… January 17, 2022 Traditionally, software intended to run on a medical device was expected to be written by companies well versed in writing…
OFF-TOPIC: Lost and found February 18, 2021 When I come into the house, I hang my keys on the hook. If I want my keys and they…

This article first appeared on the Siemens Digital Industries Software blog at https://blogs.sw.siemens.com/embedded-software/2014/09/04/pulling-the-cork/