I have always been interested in technology and innovation. I do not think of myself as a “gadget freak”, though others might have a different view. However, when something new comes along, even if I am not an “early adopter”, I am always on the lookout for things that might improve my life.

Sadly, I am often disappointed. So often a device either does not work at all or simply fails to live up to expectations. This is making me more cautious. I thought that this was just a phenomenon that was associated with age, but I recently discovered that it is much more general …

I am sure that everyone is familiar with the sequence of events when a new technology becomes available or a new gadget is announced. It starts off as the greatest thing since sliced bread and is going to solve a whole load of problems. It never quite delivers on this promise and everyone is disappointed. Then a surge of realism occurs and the technology/device finds its right place in the world.

I can think of any number of examples where this pattern has occurred: radio, television, telephone, the Internet, personal computers, smart phones, tablets … I now learn that this sequence is called the Hype Cycle and it looks like this: 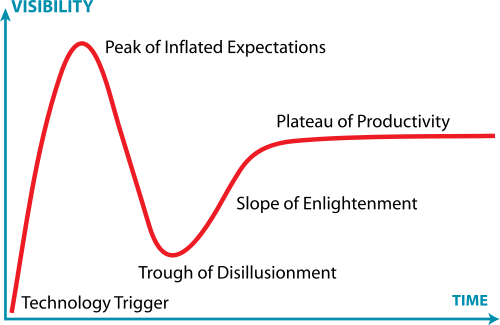 It was mooted by Gartner about 20 years ago and I think that it makes a lot of sense. Their perception of its use seemed to be from a purchaser’s point of view. If you can figure out where something is on the Hype Cycle, you can decide whether it is the time to invest [in the product or the company behind it].

I have been pondering whether it has other uses. As I work in marketing, I wondered if it could be a tool for determining how to present or portray a product. Possible approaches, given the knowledge of a product’s current place in the cycle, might be “Best thing since sliced bread”, “Not as bad as others on the market”, “Solid and well established” …

BTW, it seems to me that the Hype Cycle is not really a cycle, which implies some repetition. Maybe the Hype Curve or Hype Trajectory might be a better term.

BTW2, sliced bread was first sold nearly a century ago. What did people use as the benchmark for goodness before then?

OFF-TOPIC: Expectations vs reality January 14, 2021 I am of the opinion that disappointment is an underrated emotion. Many people do not see to take it seriously.…
Security of Medical Devices – A Changing Regulatory… March 2, 2022 Over the past two decades, medical devices have been increasingly likely to be connected to the outside world using Wi-Fi,…
Medical Devices MUST Be Secure September 24, 2021  I recently had the opportunity to present in a Webinar focusing on security needs of medical devices along with Patrick…

This article first appeared on the Siemens Digital Industries Software blog at https://blogs.sw.siemens.com/embedded-software/2013/01/31/the-hype-cycle/