About 30 years ago, my late wife and I bought a sofa. That may sound like nothing to be excited about, but it was the first “serious” piece of furniture that we ever bought. It came from Habitat, which was très chic in those days. The name of the product in the catalog was Hannibal, so that was how our new sofa came to be known. The sofa was an indulgence, as it was very expensive – leather furniture cost much more in real terms back then. But we never regretted the purchase.

Hannibal lived with us over the years, as we moved from one house to another – 5 in all. It was sat on, slept on, climbed on and generally abused in the way that only a family can. Two years ago, when I moved to my current house, I sadly concluded that Hannibal was probably coming to the end its life …

The years of abuse had taken their toll and Hannibal’s leather was in a very bad way – faded, worn or torn, the sofa looked very scruffy. Something needed to be done and I concluded that there were 3 options:

I could not bring myself to do (1), so I got an upholstery firm to quote for (2) and (3). The cost of re-covering in fabric was quite high – maybe 2X the cost of a new sofa; leather was worse – more like 3X the cost of new. I justified having the sofa restored [to myself] by realizing that it was the more environmentally friendly option. 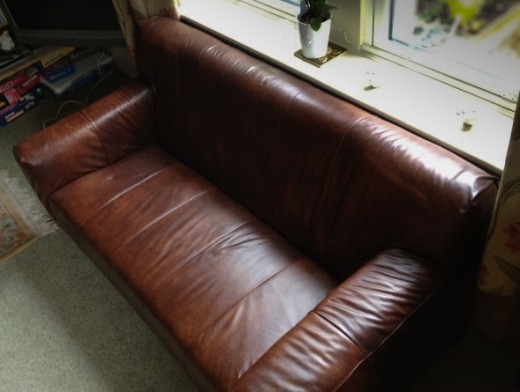 I asked the guys why new leather sofas are so cheap and yet Hannibal had been expensive and their charges were high. They explained that, years ago, a sofa would have been covered in full thickness leather and Hannibal would have needed about 3 complete hides, which was expensive. Modern sofas are covered in thinner material, which is made by using a laser to split the leather – a single hide could do a whole sofa, which cut the materials cost drastically. The thinner leather is also easier [cheaper] to work. It also has a short lifetime, which is why they had quoted for recovering in full thickness leather.

After a lot of deliberation, I decided to bite the bullet and have Hannibal restored to its former glory. Off went my sofa on the back of a truck and a few weeks later a reincarnated Hannibal was delivered back to me. The restorers did an amazing job, far exceeding my expectations. The leather looks just right, with every panel cut and every fold made just like the original. I am pleased that I spent the money to get the job done properly. I am optimistic that Hannibal will now last another 30 years [even if I do not!].

OFF-TOPIC: Noisy electric cars October 15, 2020 I am clear that electric cars are the future and I have passed some comments on the matter a while…
OFF-TOPIC: The history of today March 18, 2021 When I was at school [a long, long time ago!], I really could not see the use, or more specifically…
OFF-TOPIC: 12 things done or not December 17, 2020 Each year I make a list of “things” that I plan to do. You might call them “goals”, but I…

This article first appeared on the Siemens Digital Industries Software blog at https://blogs.sw.siemens.com/embedded-software/2012/10/25/repair-or-replace/