I have always been interested in science and technology. My work and the stuff I write about in this blog bear testimony to that. This does not mean that I have to acquire all the newest, shiniest electronic devices as soon as they become available. Indeed, for instance, I never owned a game console of any description until last year, when I was persuaded to get a Wii. But, sometimes, my imagination is caught by something that I hope might improve my life. For example: I have a netbook computer with battery life that exceeds 8 hours; I have an Android phone; I have a very capable camera [although I fail to see the point of DSLRs and regard them as a clever scam by the camera manufacturers]; I rarely watch TV as it is broadcast, having used a hard disk recorder for many years; and, of course, I have an iPad.

I thought that it might be interesting to identify the best technology that I had come across in 2010. My first thought was the iPad. Although this is a remarkable [I have to avoid the use of the word “magical” as Apple have already over-used it] device, which has changed my life, I think that it has got quite enough publicity. So, I thought of something else …

Internet connectivity is becoming more and more important to many people’s lifestyle – it certainly is to mine. Fortunately, WiFi is widely available and offers great flexibility. The problem is that it is not, as yet, universal. Away from WiFi, the next best option is generally a 3G cellular phone connection. This is what my phone uses, for example. Many people have “dongles” for their laptops which enable them to use 3G services. From what I have seen, they are satisfactory, but require the installation of specific software and are rather inflexible. When I bought my iPad, I specifically chose to have WiFi only, as I did not want to maintain another cell phone account and did not anticipate the frequent requirement for me to have connectivity away from WiFi. 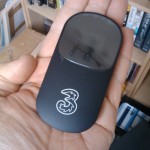 Then I found a compromise that offers a level of flexibility and ease of use that I found compelling: MiFi. A MiFi device is very compact – mine fits in the palm of my hand – and charges from a USB connection [so no power supply to carry around]. When switched on, it connects to the 3G network and provides a secure, short range WiFi network for up to 6 devices. It seems to give quite a few hours use from a charge and can also be used while it is charging. So, I can be sitting in a café or on a train and connect using my netbook, phone or iPad and offer the service to any friends/colleagues in the vicinity. As it is standard WiFi, no special access software is needed. I have a pay-as-you-go account [monthly contracts are another option], which means that I pay as and when I need access. It costs me about $3 for 1Gb of data transfer, which is valid for 24 hours. This is rather better value than the service offered by many hotels!

OFF-TOPIC: Taming the Bear November 26, 2020 I like to be organized and generally in control of my life, both at work and the rest. This means…
Security of Medical Devices – A Changing Regulatory… March 2, 2022 Over the past two decades, medical devices have been increasingly likely to be connected to the outside world using Wi-Fi,…
OFF-TOPIC: 12 things done or not December 17, 2020 Each year I make a list of “things” that I plan to do. You might call them “goals”, but I…

This article first appeared on the Siemens Digital Industries Software blog at https://blogs.sw.siemens.com/embedded-software/2011/01/06/best-tech-of-2010/