I don’t normally post about the Community’s analytics, but I think this is pretty special. This past October marked the first month since launch that Community pages were viewed a million times or more.

Typically when someone wants to exaggerate, they give the context of “a million.” “It probably costs a million dollars.” “I told you a million times!” “Not in a million years.” It’s become a metaphor for “extraordinarily large number.” To be faced with not exaggeration, but the reality, of a million page views in a single month…it’s almost hard to conceptualize. A million eyes on our forum threads? A million eyes on our blog articles? Or are one (or two, or three…) of you sitting there and hitting F5 on the homepage?

It has taken us about four and a half years to get to this point. Many of you remember when this iteration of the Community was first launched in 2013. Fewer of you remember the BBS before it. I’ve only been here for part of this Community’s life, but I can’t help but be amazed at how far it has come even in that time. I can only imagine what @SusanCinadr thinks.

I often wish I could go back and read her diary from 2013, to see everything she hoped and dreamed the Community would be. 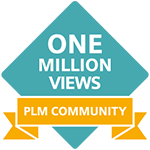 If you had logged in at all during the month of October, you will have received a special badge today; the “One in a Million” badge. Not all of you visit every day, or even every week. You might have only logged in once, and viewed one page. You might have been online more than I was. You might have accidentally clicked your Community bookmark and immediately closed the window. The point is, you were a part of us reaching this goal. And I thank you for that.

To the next million.