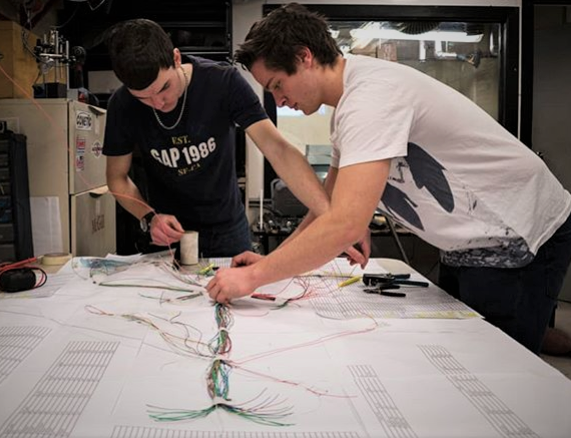 Just like in industry, student competition teams have to design and build real electro-mechanical systems, which include the electrical system architecture, schematics and wiring harnesses.

VeSys software from Siemens, an easy to use subset of the Capital software suite has become the de facto standard for hundreds of student teams worldwide to solve their wiring challenges. Testimonials from two top student competition teams attest to the value of VeSys. One team competes in Formula SAE Electric (sponsored by SAE and Siemens Digital Industries Software) and the other team competes in the EcoCAR Mobility Challenge (sponsored by the U.S. Department of Energy, General Motors and Siemens.)

VeSys provides automated harness engineering for creation of production-ready schematics, drawings, BOMs, costings, NC Files, and fabrication guidance reports. With its unique integration of Siemens’ NX™ CAD software and other 3D CAD systems, it provides rapid-first-time, error-free electrical system and wire-harness design. Using a simulation module from Capital, teams have also been able to light-weight their high-voltage/high-current wire-harnesses. This is especially useful for formula electric and hybrid drivetrains. Another benefit of the ‘digital twin style’ integration with CAD is being able to design 3D-accurate wiring before their carbon composite monocoque chassis is even fabricated. Not only is VeSys used by businesses all around the world, it’s also being used by student teams looking to innovate the next generation of electric vehicles such as Formula Electric and Autonomous vehicles.

The McGill Formula SAE Electric Team and the University of Waterloo Alternative Fuels Team (UWAFT) located in Canada have leveraged the strengths of VeSys software to perform in the top tier of their competitions. These student-run teams design, build and compete with advanced vehicles: Formula SAE Electric race cars (McGill) or the EcoCAR Mobility Challenge vehicles (Waterloo).

We picked these specific teams to highlight our software for two reasons. The continuous success they have had over the years in their respective competitions – and because they face different challenges. Formula cars are designed from scratch, while EcoCAR vehicles are GM production vehicles which are heavily modified. An example of McGill’s success was placing 1st overall at FSAE Electric in 2019, while setting a new North American FSAE acceleration record at 3.7s. An early innovator of alternative fuel vehicles, The University of Waterloo team was formed in 1996. Since inception, UWAFT has built seven unique alternative energy/advanced vehicles, making them one of the top EcoCAR teams in North America.

Both teams found VeSys extremely beneficial for several reasons. As one of many examples, VeSys allows the option to add very specific and even custom devices to the diagram. This makes it much easier for readability and ease of fabrication​. McGill’s electrical team leader stated, “Our formula electric car’s electrical system and harness design process began with an analysis of the FSAE rules and a review of the various electrical components targeted. From this starting point, we developed a list of requirements that our wire-harness must meet in order to ensure our car operates within the FSAE rules – while also powering all sensors and components on our car. A preliminary wire list was developed from the requirements. The wires were then added to the wiring diagram in VeSys. Then a series of reviews ensured all needed signals were included, before it is integrated with our chassis using MCAD software. It is this step where our team can make the most of VeSys.”

“The pin list and wire list assisted our team in ensuring wires were not missing from our connectors and tracking the paths of wires through one of our sub-harnesses. Using the highway feature we can clearly communicate the paths wires take through a sub-harness, while also keeping the wiring harness clean & easy to read. By default, the devices and connectors created on diagrams have pin name conventions that differ from the pin names used for our CAD library of connectors. For example, VeSys defaults to “PIN1, PIN2, …” whereas our AS connectors have their pins names as “p1, p2, …” or even “p01, p02, …”. Using the VeSys Components application, we can define library part numbers for our connectors (e.g. the AS 7 pin, DTM 12 pin, etc.) and label the cavity names for those connectors. Then, in the VeSys design application, we can go into an object’s properties and select a part number for it; VeSys automatically renames the pins according to how they were defined in the Components library. This speeds up our workflow by automating the pin renaming process. When our wiring diagram was completed & verified the wires were then added to the CAD model of our car in Siemens NX. Using VeSys we are able to import our harness directly into NX, which greatly reduces the time required to design our harness, while also eliminating any sources of error that come from manually routing connections in NX.”

Adopting new software can be a hardship for teams due to the fact that there is turnover as students graduate. Ease of learning and learning resources are even more vital for student teams. They must be able to quickly comprehend the software including the work flow. A solution for new team members is the the VeSys/Capital online course training library, which provides a rapid path to competency. The on-demand, online course delivers examples and lab sessions for students to quickly learn the new software. The Waterloo EcoCAR team was impressed with this training course and commented, “When training new users, we often relied on the tutorial videos and activities provided to us by the Mentor website. They then added, “The videos are quick, but also informational and easy to understand, and they provide examples and helpful walkthroughs, so you do not get lost.”

VeSys also provides the ability to create professional-looking schematics, including many customization features. This enables clear documentation for these components and wires. This also helps score more points for the team from design-judges. Below is the Waterloo team schematic of the entire layout that displays the internal implemented wiring for their GM Blazer vehicle. The design implements student modifications that create both a hybrid electric powertrain and level 2 autonomous driver aids.

The Waterloo EcoCAR electrical leader stated, “We used VeSys for all wiring and harness diagrams that were used in the vehicle. We started the year with preliminary schematics of all the different harnesses that were to be put into the car. VeSys allowed us to map out where components were located and offered a great visual on the general flow of the harnesses. After a thorough review with UWAFT leadership, we had our first set of schematics for the car!”

As we were building harnesses, we referenced the schematics for the connector and pin information which made the harness building process very smooth. Once all the harnesses were built and mounted in the car, we began our final draft of schematics, which we now call our Electrical Master schematic.”

“In electrical master, we were able to show the cross-referencing of wires between the various harnesses. For example, our 12v schematic had all the power wires that go to all our different components in the car.”

With VeSys, you can look at that schematic and point to the exact location of that wire in another schematic. Overall, VeSys allowed us to visualize our harnesses during the entire integration process and helped us create our Electrical Master schematic which will be used in the next year of the competition.”

Formula Student teams all over the world are adopting VeSys software. It allows these teams to achieve their goals in tough competitions through VeSys’ and Capital’s comprehensive features and CAD integration. The teams above are just two examples of how teams around the globe are using VeSys to their advantage in real-world university competitions. Focused on efficiency, visuals, and time, VeSys helps them earn the competition judges respect and points towards a win.