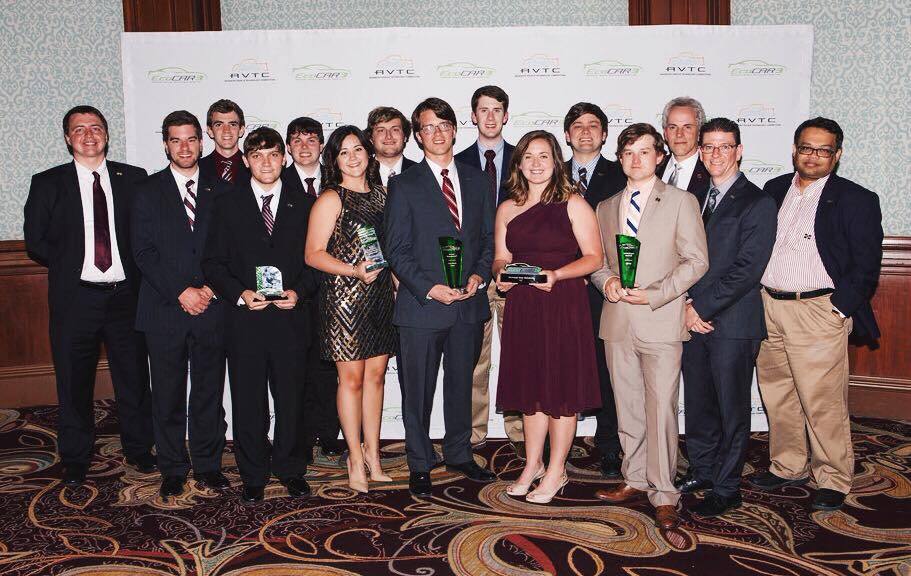 Siemens supports competitions like EcoCAR to develop real-world ready students. EcoCAR 3 is a 4-year competition, sponsored by General Motors and the U.S. Department of Energy, to turn a 2016 Chevrolet Camaro into a fully functional hybrid-electric vehicle. At the end of the year, 16 teams across North America compete in vehicle design, mechanical, innovation, controls, project management, and communications. Students present progress and lessons learned to real-world judges and compete to win awards in each category.

Siemens is a sponsor of EcoCAR 3 and has granted millions of dollars’ worth of software programs. One of the most widely used software programs by the universities in the competition is NX, It helps companies, and in this case students, create and deliver better products, faster and more efficiently. GM uses NX and provided each team with the NX CAD file of the Camaro. In fact, Siemens software is used by 29 of the top 30 automakers. NX is especially helpful for the 16 EcoCAR teams looking to revolutionize the future of the auto industry. Siemens PLM Software provides an Excellence Award to teams who demonstrate and communicate the most effective use of NX design and simulation software.

To be considered for the award, teams submitted a report on how ﻿they used the software for the various components of the vehicle. These reports were judged and scored and first place was awarded to the Mississippi State University (MSU) EcoCAR 3 Team with judges citing, “the team clearly demonstrated the most effective use of NX design and simulation software during EcoCAR 3 Year.”

Siemens spoke with Matthew Tidwell, the team member who put together MSU’s report for the award. Tidwell, a junior undergraduate student from Huntsville, Alabama, is studying mechanical engineering at MSU. He is a mechanical sub-team member for the EcoCAR 3 team where he helps render CAD images and routes HV and LV wires within an NX-specific role. He specifically works on the vehicle’s energy storage system as well as molding various mounts and support structures.

Overall, the software was able to help the entire process from design to fabrication all while giving students working on the vehicle real-world experience, putting them miles ahead of students at universities without the software experience.

Mississippi State has had a successful first two years of the competition, however, like any challenge issues arose. The MSU team dealt with one such issue, “during Year Two we had a hiccup and didn’t get the car running at the end of Year Two for the competition,” Tidwell said. Even so, the team feels that they are in a good place moving forward for the final two years of the EcoCAR 3 Competition as they use NX to redesign and refine their designs to create the best vehicle possible.

One feature of NX that will be used in the next two years to assist the team in perfecting its vehicle is finite element analysis (FEA). Tidwell found this to be the most useful feature of the software because “It does a good job in showing real life stress or strain based on certain loads in various places in the vehicle and shows if the design will work or not.”

NX will be essential to refining and simulating MSU’s vehicle design so the team can improve their standing in the program during Year 3. The MSU EcoCAR 3 team at the Year Two Competition﻿Software like NX is helping students across the world develop their critical thinking skills to solve complex, real-world, problems. The universities preparing these students are leaders of education in the new, digital world. These students will be better prepared for their   careers in digital and design manufacturing.

MSU placed fifth overall in Year Two of the competition.

The top six teams for Year Two were as follows;


Learn more about the EcoCAR 3 program and all 16 of the teams. Siemens is a proud sponsor of the EcoCAR 3 competition and is working hard to bring the necessary software tools to students across the globe to assist the learning process for the future workforce. Siemens looks forward to seeing how these teams and students work to revolutionize the auto industry and the world in the future.

This article first appeared on the Siemens Digital Industries Software blog at https://blogs.sw.siemens.com/academic/siemens-helps-ecocar-3-students-learn-digital-skills-for-the-future/