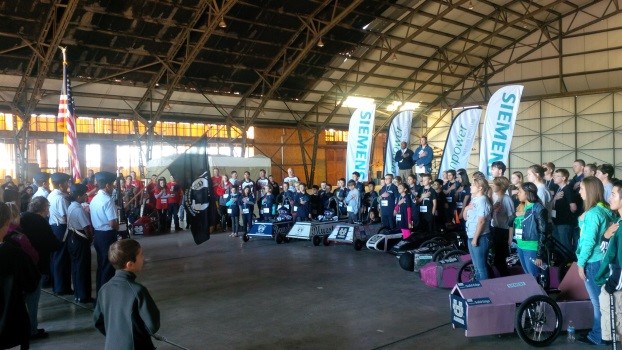 The Siemens sponsored Greenpower Education Trust wrapped up the 2015 race season with an International Finals at Rockingham Motor Speedway in England. Established in 1999, Greenpower participation has grown. More than 100 teams of students competed in the 2015 finals.

This year Greenpower intorduced a new kit car series.Kit cars are standard component cars that students assemble, adding a car body around the frame, and then race.

The next race, a Lap Race for the Formula 24+ and Corporate Challenge categories was also new to the Finals. The Lap Race winner is determined by completing a selected number of laps in the fastest time. Teams learned just 2 hours before the race which selected number of laps they needed to compete for the fastest time. Students scramble to work out gear ratios and physically change the gears before taking to the grid. The consistent speed and reliability of Cullimore Racing’s Jet II car gave it the winning edge over the competing 26 . Dave Cullimore used Siemens Solid Edge to design his winning car.

There were 75 cars on the track for the first of the two 90 minute IET Formula 24 races. Chipping Sodbury School’s ‘Rotary Racer’ claimed vistory at the first race.

The 60 minute IET Formula 24+ Championship and the Silverline Corporate Challenge followed.  The idea of these is to challenge students and apprentices ages 17-25 to design and build custom cars. Renishaw’s Reprobation quickly overtook the 2013 and 2014 championship winner and overtook Jet II winning all three titles F24+ race Winners, F24+ 2015 Champions and Silverline Corporate Challenge Winners. Siemens software was used by all winners on the podium in both race categories. The Renishaw and Silesian University teams use NX and Cullimore Racing uses Solid Edge.

The second 90 minute IET Formula 24 race of the day followed. Many teams had been furiously working on their cars to improve their performances from the first race. Rotary Racer put in a fantastic final showing, completing 44.1 miles in 90 minutes and confirmed their 2015 champion status. TeamUSA finished a respectable 8th in the F24 category improving their position each year they have raced.

Soon after the International Finals, Greenpower crossed the Atlantic for a very different event. While the size and the scope of the race in Rockingham is what GreenpowerUSA hopes to match in the future, the U.S. program is just getting off the ground, having been established in 2014. On Saturday October 24th GreenpowerUSA in partnership with GEAR UP Utah (Gaining Early Awareness and Readiness for Undergraduate Programs) held their first event at the historic Wendover airfield.

Ten Middle and High Schools along with three Elementary schools from across Utah participated in exhibition races throughout the day. Students and teachers alike had a chance to experience Greenpower with races in both the F24 and Goblin car category. Goblins are the Elementary school category of kit cars aimed at students 9-11 year of age. Students had the opportunity to learn about how their car performed and plan to take this knowledge back to make improvements for the next race.

Next GreenpowerUSA was on the other side of the U.S. for a race at Whitesburg’s new Pre-K 8th grade school, in Huntsville, AL. Whitesburg P-8 held a ribbon cutting before the race to present its specially built Greenpower race track integrated into the design of this new Huntsville City School. Huntsville City Schools ETV group broadcast the race live to the internet and had a full camera crew, including drones, filming the proceedings. The SCCA (Sports Car Club of America) members provided “scrutineering “for this event.

Eight F24 cars represented High School and Middle School students. It was the Middle School teams that prevailed with a down to the wire race between Challenger Middle and Whitesburg P-8. With both teams were neck in neck for the entire 90 minute race, Challenger squeaked by at the end.

This race was the second race hosted in Huntsville and a third race is planned for next spring.

This year Greenpower expanded to South Africa and Poland.

Greenpower is certainly starting to accelerate around the world!

Learn more about some of the international teams as well as Cullimore Racing who took part in the Greenpower Internaitonal Finals.

To find out more details about Siemens involvement with the Greenpower Trust plese see our Projects & Competitions page.

This article first appeared on the Siemens Digital Industries Software blog at https://blogs.sw.siemens.com/academic/greenpower-electric-car-challenge-accelerates-across-the-globe/