“How thick is a leg hair” is not a question I thought I’d be posing when I woke up today. Reading this article about the effect of leg hair on the overall drag of a performance cyclist prompted me to investigate the physics behind this observation. For the sake of expediency I steered clear of a full body MAMIL simulation, focussing instead on just a small patch of a particularly hairy leg subjected to an oncoming air flow.

Air will ‘stick’ to any solid surface, even a silky smooth leg. Away from the wall it speeds up until it reaches free stream speeds. That thin sliver of slow moving air, hugging each solid surface, is called a boundary layer, often graphically indicates as a series of velocity vectors, running parallel to a wall, increasing in size away form it. This stickiness offers a resistance, more for treacle, less for air. So, even a shaved leg will offer some resistance to the air flow. 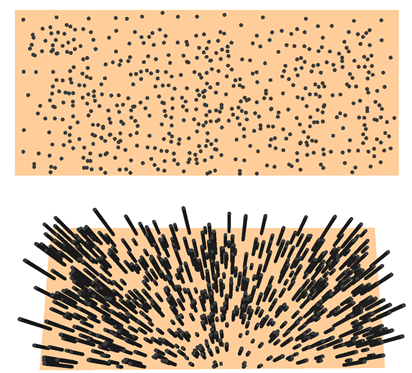 Add to the wall (skin) a whole forest of hairs then you’ve added loads of new solid surface area to which the air will stick. I did go looking for a MCAD file of hair but to no avail. Instead I mocked up a random distribution of stubble type hairs of a density pretty high up the Chewbacca scale. Nice and simple, no moving hairs, no curly hairs, no solid fluid interaction. Such stubborn stubble being an extreme case in cycling aerodynamic drag, rather lack of it.

In addition to the increase in surface area and the resulting increased stick of the fluid, the more tortuous a path the fluid has to travel through the hairy obstruction, the more difficult it finds it to do so. This fluid difficulty manifests itself as a pressure drop, effectively the energy required to achieve that flow.

So, using FloTHERM (though FloEFD would have been more appropriate, old dog, new tricks etc.), I simulated air approaching the segment of hairy skin to see just how tortuous a path it would be made to follow. The red areas are high speed flow, the blue/green areas low speed, especially obvious in the slow moving recirculating wakes behind each hair. Even more evident if we look at the flow animation:

Each twist and turn of the flow equates to a force required to overcome it. The more hairs you have on your legs, the more force you’ll need to overcome it, the more energy you’d need to expend. For Chewbacca this equates to the difference between changing from a round-tube frame to an aero-style one.

FloEFD has a proven track record for sports applications as this fascinating webinar by Olympian Professor Kristan Bromley shows.

Flow Visualization and the Beauty of the Vortex Dome January 14, 2021 Fluids tend to be transparent, which is problematic for flow visualization. Rheoscopic fluids get round this by seeding the flow…
Demystifying Electromagnetics, Part 9 - Skin Effect October 13, 2021 A conductor carrying an AC current will tend to have the current bunched up at its periphery. Why and why…
Chaotic Fluid Dynamics Part 1 - Rabbits December 8, 2020 A person walks into a bar and asks the bartender "what's the difference between period doubling routes to turbulence and…

This article first appeared on the Siemens Digital Industries Software blog at https://blogs.sw.siemens.com/simulating-the-real-world/2014/10/06/leg-hair-what-a-drag/