My boss, Roland, relocated from Germany to the UK a couple of years ago and has taken to life in England with alacrity. As a gift for the Mechanical Analysis product development department (Hampton Court) he bought a little fridge which has been busy ever since cooling the beer in it that everyone has been too polite to drink. A few weeks ago it stopped working. Some inquisitive minds and a couple of screwdrivers later it was in pieces with the conclusion that it was the thermoelectric cooler (TEC) that had given up the ghost. For a product whose raison d’etre is thermal I thought it would make a great case study in the application of FloTHERM for (retrospective) thermal design.Over the coming weeks I hope to show how FloTHERM can be used to design a better beer fridge (the thermal equivalent of a better mouse trap?), taking time to showcase some of the classic FloTHERM features that ensure it remains the #1 CFD based tool used for electronics thermal analysis.

[As an aside it’s also an excellent opportunity for me to take a more user-real approach to acceptance testing the forthcoming version of FloTHERM, V9.2…]

The fridge works by having a thermoelectric cooler (TEC) pump heat using the Peltier effect from inside the fridge down to a heatsink where a fan then blows cold air over it so that the heat is convected away from vents in the lower portion of the fridge housing. Such a flow of heat should ensure the space inside the fridge remains at a low controlled temperature. Much less noisy than the classic evaporator/condenser cycle approach used in most domestic fridge/freezers (though sometimes not as reliable!). 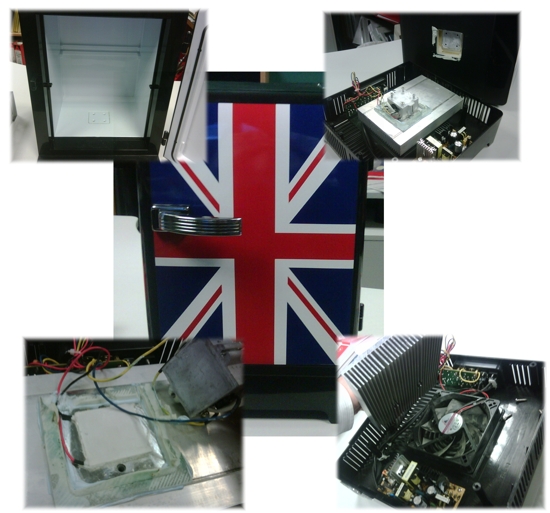 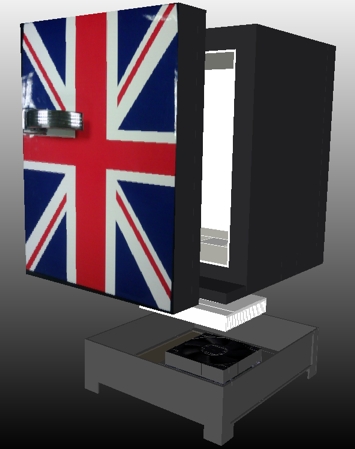 Such an application is considered a ‘bread and butter’ case for FloTHERM. Using nothing but a ruler I measured up the main constituent parts of the fridge and had created a 3D representation in FloTHERM in just over an hour. What took a little longer was obtaining the characteristic information for the TEC and the fan. Such objects are not modelled explicitly per se, a so called ‘compact modelling methodology’ is applied where their key physical behaviour is retained but without modelling the exact physics of their operations. For the TEC, parameters such as the the current required to pump a certain number of watts against a temperature difference at two (hot side) temperatures are used as input to FloTHERM TEC ‘SmartPart’ object (this particular TEC was not a Marlow or Melcor TEC SmartParts in the installed libraries). For the fan, the fan curve that relates the pressure drop over than fan to the amount of air that it can shift was required. Thanks to the beauty of Google (other search engines are available) such information was only a part number away.

The Union Jack was simply a matter of using FloTHERM’s texture mapping capability, using a .jpg image taken by my phone camera. The ‘fly-by’ animation shown on the left here is created by setting a few choice view points locations which are then traversed in sequence and output as an .avi (I used Corel to convert to an animated GIF).

Any competent user of simulation software should have at least a grounding in the theory behind the physics being simulated to the extent whereby the results generated can be perceived as either being realistic or not. Just a fancy way of saying that I expected the air within the fridge to be cold. Here are the surface temperatures on the inside of the fridge, with the side of the fridge hidden for clarity. 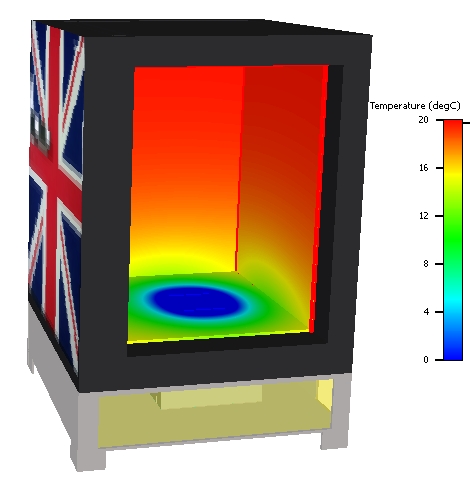 Not wanting to cast dispersions on the purchasing power of my boss but by all accounts this looks to be a real cheap and nasty fridge, not at all providing a uniformly cool interior. The TEC cools a little coldplate at the bottom of the inside of the fridge, sucking heat away from the air in the lower portion of the fridge but, as hot air rises, the cold air simply stays at the bottom.

Going back to the TEC, one thing I did have to assume was at what current it was set to operate at. For this model I guessed at 2.5A. TEC performance is very sensitive to this, I wonder what an optimal TEC operating current would be for this fridge. More on that next time!

This article first appeared on the Siemens Digital Industries Software blog at https://blogs.sw.siemens.com/simulating-the-real-world/2010/11/26/beer-fridge-a-case-study-in-thermal-design-part-1-a-gift/