My recent experiment with adjusting my diet was interesting, even if it was not 100% conclusive. Watching for the appearance of dairy in various foodstuffs made me a little more aware of what I was eating. That was good. Feeling deprived of certain things made me desire them even more – I really am not good with restrictions. This made me think about some of my favorite foods …

On a previous occasion, I cataloged six favorite foods. However, six was not enough, so here is another half dozen:

I do love cheese and can enjoy almost any type, but I do have reservations about some of the complicated made-up confections: “cheshire with cranberries and parsnips, soaked in sherry and coated with hazelnuts” – that kind of thing [I did make up that example!]. Most countries seem capable of producing at least a few varieties of good cheese [I have yet to find them in the US, but I hold out hope]; some places, like UK and France excel themselves. For me, a visit to the cheese counter in our local up-market supermarket makes me feel like a kid in a candy store. So important is cheese that I dedicated a “six of the best” posting to it. There is a single exception. A cheese that I do not like. Cottage cheese should be declared a chemical weapon – it is the work of the Devil.

During my two weeks of being dairy-free, cheese was the biggest thing that I missed, because there was really no viable substitute. Chocolate was #2, but at least I could find some chocolate bars that were guaranteed dairy free. They were OK, but I would much rather have a choice. My favorite chocolate is simple, unadulterated [I do not need fruit or nuts or whatever] milk chocolate. I also really like a strange Swedish variety that has chips of licorice in it – very Scandinavian! Sadly, it seems to be unavailable in the UK.

For me, yogurt is a nice part of a solid breakfast – normally with muesli and fruit. I like the Greek, set kind of yogurt best. Mostly I get flavored yogurt [honey, for example], but plain is useful for me to get creative with flavoring it myself. Again, it was something missing in my dairy-free period. I did try a soya version, which was OK, but not great. I think of yogurt as being a fairly natural product, which has a short list of ingredients. I was shocked to study the label on an American yogurt some years ago.

I think that eggs are one of nature’s marvels: a nutritious foodstuff, that is perfectly packaged to preserve the contents for a reasonably long period without refrigeration, and which is very versatile in its use. It is a handy/necessary ingredient in many recipes. But, by itself, there are so many possibilities: fried [sunny side up or over-easy], poached, baked, soft boiled, hard boiled, scrambled, omelette, frittata, tortilla … I would say that I like all of these options, but I guess a [slightly runny] omelette or scramble would be favorites. 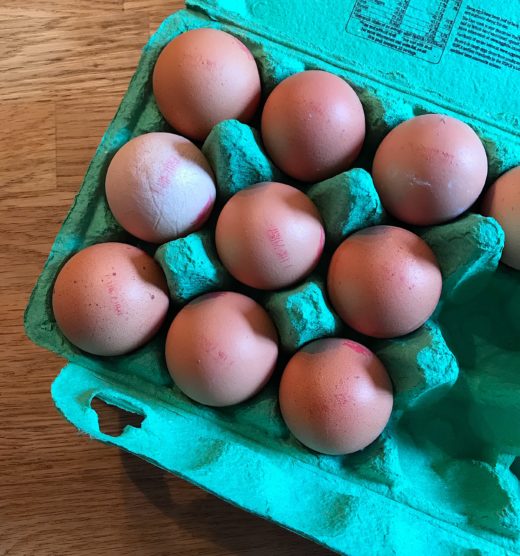 I always find eggs odd when I visit the US. They are so white and clean, whereas we tend to prefer brown or somewhat speckled ones as they seem more natural; they are also likely to be rather less clean. This preference has some interesting consequences on storage, for example. It seems that eggs, as they come out of the chicken, will keep best if they are maintained at a kind of room temperature – they will last less well if refrigerated. Once they have been very chilled, they need to be kept that way. This is because of a protective membrane layer, which is damaged by cold. It is also compromised by washing. So, if you wash eggs [Why would you do that? Only if you really liked seeing them shiny white.], they will keep less well and they do need to be refrigerated.

I remember, when I was a young child, back in the 1960s, there were various things that became traditions at Christmas. One of these was the appearance of dates: a long box, with rounded ends and pictures of palm trees, containing the sticky, shriveled brown fruits and a plastic stick that was supposed to look like a twig. A few years ago, I saw some dates in a shop and bought them [even though it was not Christmas!] to see whether I still liked them. I did and I have been buying them ever since. There is a kind of magic about eating something that is so sticky and sweet, but which is actually somewhat healthy. The dates I was used to were dried and often [annoyingly] coated in glucose syrup [which seems to serve no purpose other than to make them even more sticky and messy to eat]. Nowadays, I usually get the big, fat, fresh [Medjool] dates, which are now quite sensibly priced. I only eat 3-4 at a time, so a box seems to last ages.

The definition of the word “offal” seems to be slightly vague and I am aware that many people essentially view it as a misspelling of “awful”. I think of it as being the edible parts of animals that many people would find distasteful: hearts, livers, kidneys, brains, lungs, genitals … I have tried most of these and I am not so sure about some. However, I do like hearts [cooked slowly; the meat is low in fat and very tender], liver [lambs preferably; cooked very quickly – still pink] and kidney [needs care to prepare, but great on toast]. Sadly [I feel], most meat consumers are very insulated from the source of their food. Meat is sold in nice, tidy packages and whole carcasses being delivered to a butcher’s shop is a rare sight. This means that people are getting more squeamish and offal is harder to obtain. Personally, I feel that, if you cannot face up to where meat actually comes from, you should become vegetarian.

[Yes, I cheated; cheese appeared on both lists. Anyone who really appreciates cheese will understand the necessity of this. ?]

OFF-TOPIC: 12 things done or not December 17, 2020 Each year I make a list of “things” that I plan to do. You might call them “goals”, but I…
OFF-TOPIC: The focus on food December 10, 2020 In this extraordinary year, many people have been thinking about food. Some do not have enough - which, in rich…
Medical Devices and the FDA, a History of Change August 26, 2022 As you probably know, devices of all types continue to get more complex, more interconnected, and in the world of…

This article first appeared on the Siemens Digital Industries Software blog at https://blogs.sw.siemens.com/embedded-software/2018/02/22/six-more-of-the-best-foods/