I do not believe in magic. I contend that everything has a rational explanation and, if science has not yet explained something, it will only be a matter of time. I am surprised by my realization that my view is not as universal as I thought. There are actually many people who do believe in magic. I am not taking a side-swipe at religious beliefs. I am thinking about the casual way that many people use technology, with little or no idea how it works …

I am an engineer at heart and I want to know how everything works. I do not need to know every last detail – the basic principles are enough. I do not want to be able to build a TV from scratch, but knowing how these wonderful, full-color, moving images make it to my living room is important to me. The same mindset goes for my phone, my camera, computers, nuclear weapons … I am always rather amazed by intelligent, usually curious, people, can get by without this knowledge. Technology, if you do not understand the basis on which it works, is indistinguishable from magic. [It was the wonderful Arthur C Clarke who said “Any sufficiently advanced technology is indistinguishable from magic.” He and I have often seen eye to eye.]

A bigger surprise to me is when I find myself using something and realize that I have no idea how some functionality is implemented. I had an interesting example in the last few days …

I was traveling to a conference in Stockholm, Sweden. This obviously involved some flying. For reasons beyond my understanding, a direct flight is very expensive, but a longer, indirect route is much more reasonable – like half the price. My route was BHX->MUC, MUC->ARN. If you have a basic understanding of the geography of Northern Europe, you will immediately realize that this is a roundabout way to get there, but, as I said, it was substantially cheaper than something more sensible. 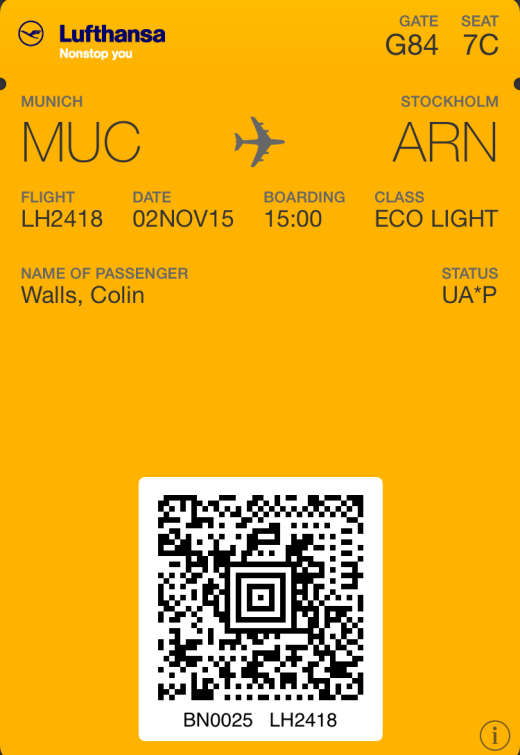 I have recently taken to using electronic boarding passes. I get an email from the airline when I check in and follow a link. The result is that my boarding passes get loaded into the Passbook app on my iPhone. The correct boarding pass pops up when it is needed. I am not sure whether this is triggered by the time or my location [already my knowledge of this technology is shaky], but it just seems to work. Until now, I figured that electronic boarding passes were just a neat way to keep track of documentation – no scraps of paper to lose or mislay in my baggage. OK, I can lose my phone, but I do tend to pay attention to its whereabouts. I had not realized that this app had some hidden magic

My first flight went well, arriving in Munich in good time. The next thing, that I needed to do, was to locate the gate for my second flight. Normally, I just look for a display screen, but, as I got off the plane, I observed that it was shown on my boarding pass. As I walked towards the G gates – quite some distance, as the German airport authorities like to keep passengers as fit as possible – I felt a buzz from my phone. I took it out to see that it was a notification from the Passbook of a gate change and my boarding pass had been updated.

As I walked briskly to my updated destination, I realized that I had no idea how this information had reached me. Clearly the downloaded boarding pass contains some kind of live link back to Lufthansa’s IT systems. I really do not know how this is achieved – it looks like magic.

The rest of my day was rather less magical. We boarded the plane and were ready to go, but were informed that there was a technical problem, that needed to be addressed. In due course, it was concluded that the plane was broken. No magic here – I know how planes work and I am mostly surprised that they do not fail more often. Lufthansa did what they are required to do and found us another airplane – eventually.

We arrived in Stockholm just under 4 hours late. This meant that I did not get to my hotel until 10 minutes before they stopped serving food. If the flight had been just a few minutes later, I would have missed my dinner, but the €400 compensation that the airline would have been required to pay me might have made me feel better. But they avoided the payout by a small margin. Was there more magic at work here?

This article first appeared on the Siemens Digital Industries Software blog at https://blogs.sw.siemens.com/embedded-software/2015/11/05/magic-and-the-art-of-business-travel/