Continuing my theme of looking at six favorite things in various categories, this time it is a topic very close to my heart: food. I am lucky as I do not have a tendency to over-eat, but I do like a wide variety of food. In fact there are very few things that I just will not eat. Some stuff I might only eat if it is given to me; I would not specifically choose it. Annoyingly, in recent years I have developed a mild intolerance to oily fish – I get a slight sore throat after eating it – which is a shame, as I do enjoy the odd pilchard or trout. I tend to avoid these foods, as I fear that my reaction might become more severe.

Narrowing my choice down to six favorites was quite a challenge …

Actually, to say it is a challenge to choose six is a major understatement! My only option was to very quickly think of a list of six foodstuffs that I would be pleased to see on the table and then stop thinking. A top 20 would have been much easier.

It will come as a surprise to my wife that my first 3 favorites are all vegetables. She maintains that I mainly like beige food and green does not feature enough in my diet. She is probably right. I use very little frozen veg and I like the fact that these three vegetables come into season in the UK at different times – being denied them for large parts of the year adds to the pleasure. 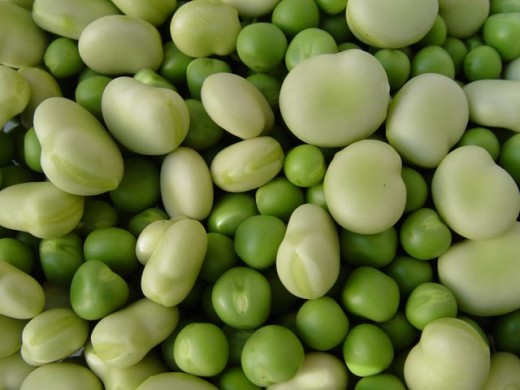 I could have probably chosen almost any kind of bean – I like them all. But the appearance of broad beans at markets and in the greengrocer’s in early summer is a highlight of the year. Podding them is somewhat tedious, but I suffer this tedium gladly enough because I know that I will enjoy the result. I just boil or steam the beans until they are tender and eat them hot as a side veg. They are also good cold in a salad – maybe mixed with red kidney beans.

People seem to either love or hate sprouts – there is very little middle ground. So, you know where I stand. In the UK, they are strongly associated with the main meal on Christmas Day [along with turkey, roast potatoes and a few other essentials], but they are readily available from November to February, at least. For years, I have maintained that the best way to cook sprouts is to boil them almost to destruction [for me, this is an exception – I like most steamed or boiled veg to be firm], then drain and toss them in butter and add plenty of black pepper. I still regard this as a great way to have them. Adding chestnuts is an interesting variation. Over the last couple of years, I have tried roasting sprouts [halved and tossed in a little olive oil – takes about 25 minutes], which makes for a good flavor and texture. I also use the roasted ones in a recipe with white beans, garlic etc. Yum!

For most of my life, sprouts have been sold cut off the stems by the pound/Kilo. Nowadays, they are also commonly sold on the stem, which apparently makes them keep better. I have wondered whether there might be a benefit in roasting the whole stem and taking off the sprouts afterwards. Sometimes the stems come with the leaves still attached. I like to get this extra free vegetable.

This veg has a short season, so we tend to binge on it somewhat. It is another example of something that people seem to love or hate. I cook it by gently steaming until it is tender, then serve as a starter course by itself – just a drizzle of olive oil and some black pepper. I seem to see asparagus all year round in my local supermarket, because it is imported from Peru. I endeavor to be environmentally sensible and do not like the idea of food being flown around the world unnecessarily, so I do not generally indulge myself. However, if an “orange sticker” appears – price reduction as the best-before date is upon us – I may buy it, as the alternative may be the pack going to waste, which is even less “green”.

Apart from the above vegetables [and others!], I do also like meat. Almost any kind of meat. I am on first name terms with my local butcher [and the greengrocer, of course] and, in order to try to identify my favorite meat, I visualized walking into his shop and looking at the display. I would have lots of options: steak, pork and lamb chops, roasting joints, offal of all kinds, chickens, bacon … There are also the products that he makes like pies and sausages. And that is where my eye comes to rest. He normally has at least six types of sausage on offer – frequently several more. I have a feeling that, if it is a quiet day and he is a little bored, he invents a new sausage. Although I do enjoy sausages of all kinds [Germany next week – sausages may be involved], I think a well made British banger is rather special.

This one is a bit of a cop out, as there are just so many kinds of cheese. The problem is that I like them all – well almost. I could easily write a Six of The Best posting on cheese alone – and I might just do that sometime. The wide variety is part of the pleasure. I get a lot of fun from putting together a cheese board for a dinner party. I normally aim to get three or four, with a combination of the familiar and the unusual. European countries all produce their own distinctive types of cheese. There is a long standing rivalry between the UK and France. The French do produce an enormous range of amazing cheeses, but I do wish that they would be less disparaging about ours.

My friend’s mother always said “never trust a person who doesn’t like cheese”. I think she had a point. 🙂

There is one kind of cheese that I cannot abide: cottage cheese. I feel that the stuff should be declared an illegal biological weapon so that I do not accidentally find any on my plate.

I think that most people like pizza. I love pizza! I had never even tried it until my late teens, when I first discovered Italian food. I have never looked back. I think the wide variety of possibilities with pizza is one of the attractions. But, ultimately, simplicity wins out with me. [I am a simple guy.] My favorite pizza is Quattro Formaggi – four cheese pizza. Ideally I like this kind of pizza with no tomatoes. It is not that I dislike tomatoes, just the additional simplicity is appealing. Actually, the original pizzas would not have featured tomatoes, as the fruit/vegetable was not brought to Europe until the late 1500s.

I recall being in a favorite pizza house some years ago. I found Quattro Formaggi on the menu, but the description listed five cheeses. I suggested [being a smart ass] to the waitress that it should be Cinque Formaggi. She said that I was quite correct and it was because “we are generous people”. A good answer and an excellent pizza.

I was severely limited by having to choose just six foodstuffs to discuss. I have a feeling that I might be compelled to post further “Yet Another Six of The Best” post about food.

This posting has been a real labor of love. I am still following the 5:2 Way of Eating and today is a fast day, so I have just 600 calories to play with. All this talk of food is distracting …

OFF-TOPIC: The focus on food December 10, 2020 In this extraordinary year, many people have been thinking about food. Some do not have enough - which, in rich…
OFF-TOPIC: The history of today March 18, 2021 When I was at school [a long, long time ago!], I really could not see the use, or more specifically…
OFF-TOPIC: Musing on handedness January 28, 2021 I have always be fascinated by the concept of being right- or left-handed. Almost all of us have this asymmetry…

This article first appeared on the Siemens Digital Industries Software blog at https://blogs.sw.siemens.com/embedded-software/2015/02/19/six-of-the-best-foods/