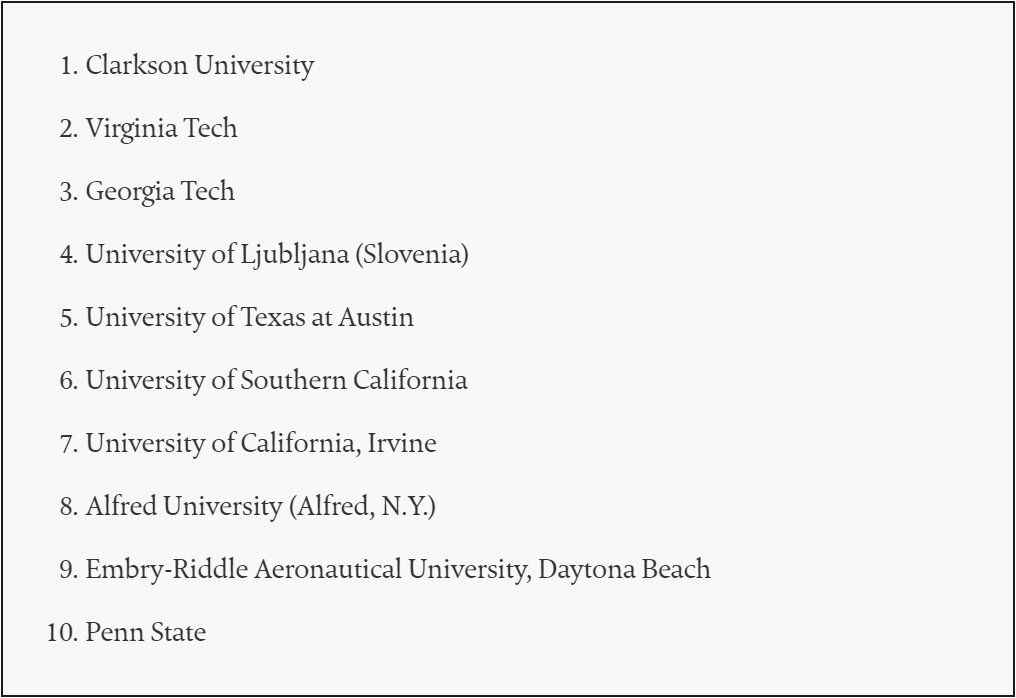 The 13-member team from northern New York state entered one of the lightest radio-controlled planes in the contest, made primarily of foam and weighing just 227 grams (8 ounces). Although most of the flying wing design was formed by hot wire cutting, the team used part of a takeout container box from a Chinese restaurant to fashion one interior panel. “We couldn’t find anything lighter,” Clarkson senior Joey Kjeldsen, who piloted the craft, said. After being blown off course Friday during the competition’s first flight mission, the Clarkson team decided they needed to fly their plane slower to control it, which meant they needed more power to stay aloft longer. They added two batteries to their power supply and consulted satellite images from Google Maps to find a place where they could conduct a test flight, which turned out to be a local school with its football field’s lights on.

On Saturday and Sunday, the Clarkson team completed the second and third flight missions. The crowd of competitors oohed, aahed and finally cheered as Kjeldsen guided the plane onto the runway in a stiff headwind to seal the victory. Virginia Tech finished second and Georgia Tech third.

Clarkson’s single-engine plane was powered by a 14KV electric motor that drains 60 watts and was capable of flying about 17.88 meters per second. The plane’s wingspan was 0.229 meter. That small size, when combined with the plane’s low weight, gave it an advantage under the scoring system created by AIAA volunteers in the aerospace industry. Thomas Smith, another Clarkson senior and the team leader, said the team spent months designing, building and testing aircraft. “We continued to shrink the plane until the pilot could no longer see it” when it was flying, Smith said, adding that it was painted with pink and green stripes for better visibility. Clarkson is a private university with about 4,300 students in Potsdam, New York. “This will be big back at Clarkson,” said Kenneth Visser, the team’s academic adviser.

The theme of this year’s competition was challenging students to design a regional and business aircraft. The planes were required to safely carry at least one “passenger” represented by a plastic ball.

The competition consisted of a written report, one ground mission and three flight missions. The ground mission required teams to replace two parts, such as a battery or a wing, chosen by a roll of dice. The first flight mission was three laps around the 305-meter (1,000-foot) course with no added weight. The second was flying the same distance with the maximum number of “passengers” — represented by plastic balls — the plane was designed for. The third was completing as many laps as a team wished with passengers and an added 227-gram payload, within 10 minutes. The mission scores were combined, then divided by a rated aircraft cost that consisted of the plane’s empty weight multiplied by its wingspan. Most teams were forced to fly in wind or rain at some point.

The fly-in attracted 720 students from 77 teams in 16 countries, making it the largest Design Build Fly competition in the event’s 22-year history. “They have an opportunity learn some things they don’t truly get in a classroom or laboratory setting,” said Brian Richardet, an engineering manager at Textron Aviation and site manager for the event. “They learn to deal with things that don’t go right.” One of the farthest-traveling teams came from Khalifa University in the United Arab Emirates. It’s the first year the school has sent a team. Sara Nabeel, a senior and the team leader, said her nation is putting an increased emphasis on its aerospace industry. The team’s 10 members built a low-wing plane capable of carrying 10 passengers and it completed all of its missions. Khalifa finished 20th in the competition.

“It’s all about the hands-on experience,” Nabeel said. “I really do believe it encourages us to be a part of the (aerospace) workforce. I feel motivated to work a lot harder.”

This article first appeared on the Siemens Digital Industries Software blog at https://blogs.sw.siemens.com/academic/siemens-proud-to-sponsor-2018-aiaa-design-build-fly-competition/