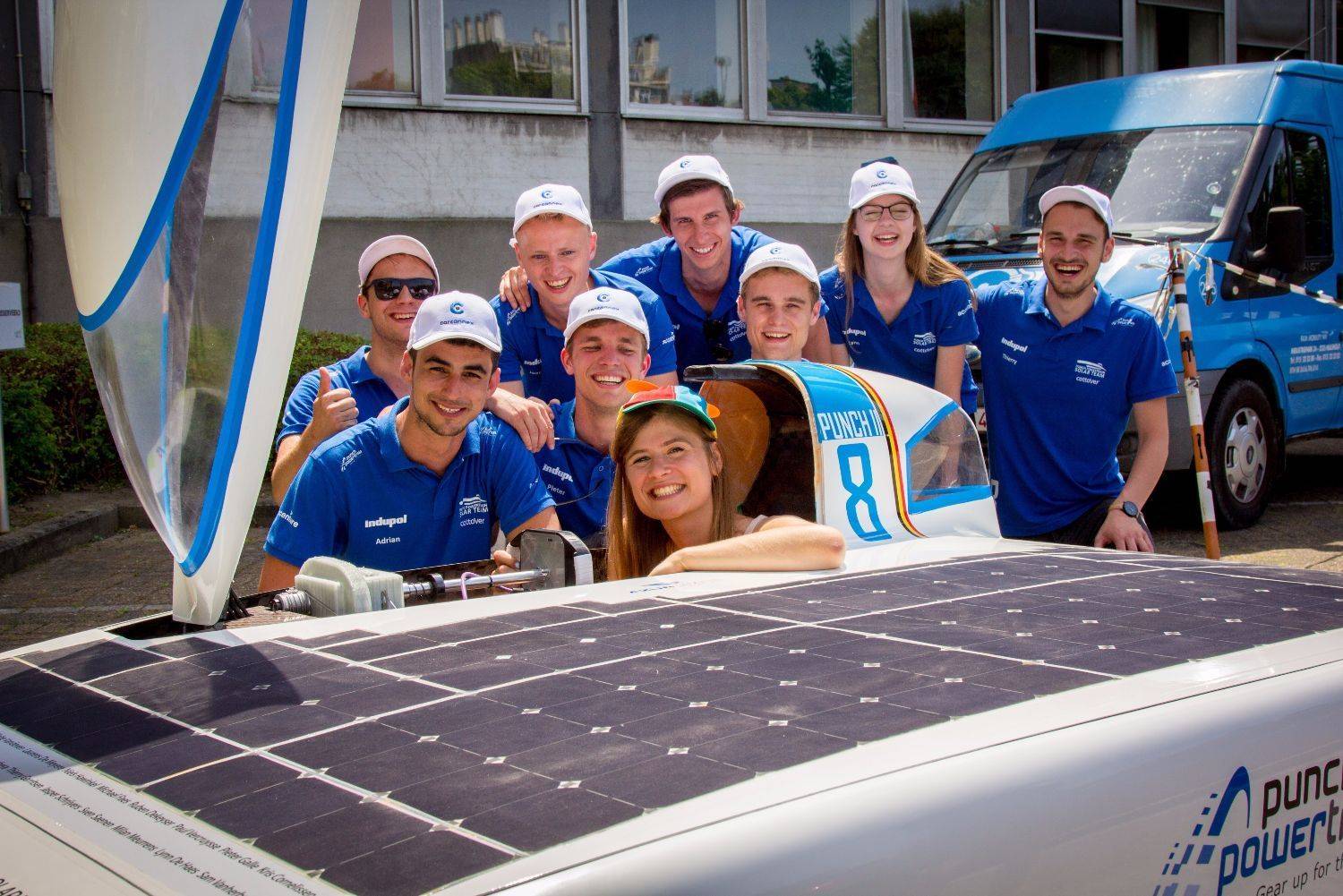 Few things define a great summer experience better than a great road trip, especially if that summer is in another hemisphere.

In October, Siemens PLM will join 44 university and high school teams on a road trip like no other in the Australian Outback. With summer temperatures rising and up to ten hours of sunlight each day, Australia provides near-perfect conditions for world-class solar car teams to compete in the 2017 Bridgestone World Solar Challenge.

Driving over 3000 kilometers in just six days is a difficult test for any vehicle. In October, teams from the University of Michigan, Principia College, the University of Leuven and other schools from around the world will make their way from Darwin to Adelaide fueled by nothing but sunlight.

Before these teams cross the finish line, they must first race to finish developing the vehicles their teams will use to compete while meeting the 2017 rule adaptation to the challenger class of racers.

To create smaller sleeker cars with improved driver vision, the University of Michigan and the 26 other teams competing in the challenger class have had to think laterally to address conflicting requirements of the competition: they need to maximize the solar collection while minimizing aerodynamic drag.

To meet these new requirements the Michigan solar car team used Siemens PLM software to create a digital twin of their new vehicle, the Novum, allowing them to digitally design, create and test the new car.

To reduce their vehicle’s measurements enough to fit within the competition’s maximum length and width (5 meters by 2.2 meters), the University of Michigan team has had to essentially cut their vehicle in half. By reducing the overall size of the vehicle, the Michigan team noticed that their cars new performance advantages compared to their previous solar car. However, like many other teams, in addition to their new significant advantages the Michigan team also ran into some stabilization issues.

Chae Woo Lim is an aerodynamicist at the University of Michigan and a race day mechanical member and driver for the team. He explained that the team had one major concern during the design phase.

Photo: UM’s Will Horner adjusts steering alignment on a mule chassis used to test many of Novum’s mechanical components.

“The biggest problem about having a car that’s almost half the size of our previous car is that a smaller car equals a smaller track width,” he said. “That leads to a possible decrease in stability.” Lim said the team put in a lot of effort to make the car as mechanically and as aerodynamically sound as possible. Using Siemens PLM’s Star-CCM+, the team ran many computation fluid dynamic simulations which helped stabilize the Novum.

“Driving around and passing by trucks and buses, now I don’t feel too much,” he said. “The car is as stable as I would have hoped.”

Following their fourth place finish last year, the Michigan team also opted to use NX CAE software to develop their latest vehicle. Along with NX, the team also chose to use Teamcenter for systems engineering and file organization, as well as well as HEEDS to create a digital twin and maximize the car body’s aerodynamic design, which ultimately saved the team hours of time testing the Novum.

Photo: UM’s Hossein Zabihian sands down a plug to ensure a smooth surface finish . Hossein Zabihian, an aerospace engineering junior on the team explained, “Teamcenter is very important for us,” he said. “For example, if we make a part in NX, I can just tell my mechanical partner the associated number and say, ‘Hey, this is a canapé in this part.’ Then, he can just put what he needs to in the aerodynamic CAD body.” Siemens has a wide range of software solutions that provide Michigan’s solar car team with the tools it needs to develop success. But, Michigan’s team isn’t the only one relying on these tools. Photo: Principia College’s early stage digital twin model of the RaX solar car.The testing and modeling capabilities of NX have also helped schools like Missouri’s Principia College develop and optimize their vehicles, named the Ra X, for the challenge. The small liberal arts college used NX to model, assemble and test the outer shell, electrical system and every nut and bolt of the mechanical system virtually before the car was physically built. As Nicole Gerber, the teams mechanical lead, explains“Throughout the design process, I relied heavily on Siemens NX 10.0 for modeling all the components of the car and doing FEA on each part to ensure that they will all hold up under extreme driving conditions.”

She continues “Being able to model the entire car made it possible to see and fix several clearance issues before anything got manufactured. Having NX 10.0 also allows us to design and 3D print custom housing for electrical components that we would otherwise have to make from scratch. Most importantly, NX 10.0 helps us to ensure the safety of our drivers by providing powerful stress testing that we can use on all the mechanical components.” Photo: Principia College Solar car team pose for photo at the ‘-Circuit of the Americas’- event.The team also used NX’s motion simulation functionality to digitally test moving parts, such as the suspension system, before manufacturing components. This also allowed the team to find new ways to eliminate drag by using the outer shell’s NX data as input for aerodynamics analyses in Fluent CFD.

Siemens NX software’s vast capability has made it a popular tool amongst teams participating in the World solar car challenge this year, including the veteran Stanford Solar Car team.This the Stanford University team has spent countless hours scaling down and detailing the design of their solar car, the Sundae, in preparation for the race using NX.

“The precision of detail we needed for our aerobody molds was too fine for SolidWorks, so without NX, I’m not sure what we would have done,” said Kelsey Josund, President of the Stanford’s Solar Car team. He continues, “During the aero design cycle, the team used NX’s deformation abilities and drew scribe lines into the final mold cycles.” Photo: Stanford Solar Car Team members posing with their vehicle the SundaeThe Sundae is now the smallest car in the team’s history. The Vehicle will feature four square meters of silicon solar cells, an aggressive aerodynamic body and 5kWh solar power batteries. Siemens software stands out as the PLM tool of choice for many teams in this completion, including the Punch Powertrain Solar Team, which represents the University of Leuven in Belgium and placed fifth in the 2015 challenge.

This year, the Punch Powertrain team has chosen to use Siemens LMS and NX 11 software to improve their vehicle’s design and drivability. As Jasper Schrijvers, mechanical systems lead and team driver explains “With LMS we can determine the forces working on the suspension. With this information, we can determine the minimum track width before tilting. The smaller the car is, the lower the aerodynamic forces are. We can also make good decisions between driving stability and efficiency. When the final suspension is designed, we can determine the forces acting on the body of the car. The structural department uses these forces to design a strong and lightweight carbon fiber chassis.”

He continues, “To quickly run simulations to verify the mechanical strength of the optimized parts we use NX 11. It’s a quick way of analyzing designed components.” Using LMS, the team is able to generate realistic information to predict the dynamic vehicle behavior of their solar car. The team is also able to account for every shape the aerodynamics sub-team draws for the car and analyze the dynamic force on the car. Photo: The Punch Powertrain Solar Team posing with their vehicleWith the final model drawn and the can accurately predict the forces working on the car’s suspension and reduce the weight of their vehicle with FEM simulations in NX 11 reaching a total weight of 140 kg for the entire car.This has made Jasper, like most drivers in this completion very confident in his vehicles ability and his team’s chances of winning the race.

With teams so dedicated to building the best possible version of their vehicle the 2017 World Solar Car challenge promises to be one of the best in the competitions long history. Regardless of what Siemens software they have used each team is confident that their vehicle has the potential to cross the finish line in first place. Regardless of the final result, Siemens PLM Software is proud of every one of these team.

This article first appeared on the Siemens Digital Industries Software blog at https://blogs.sw.siemens.com/academic/siemens-digital-twin-technology-is-helping-students-race-across-australia/