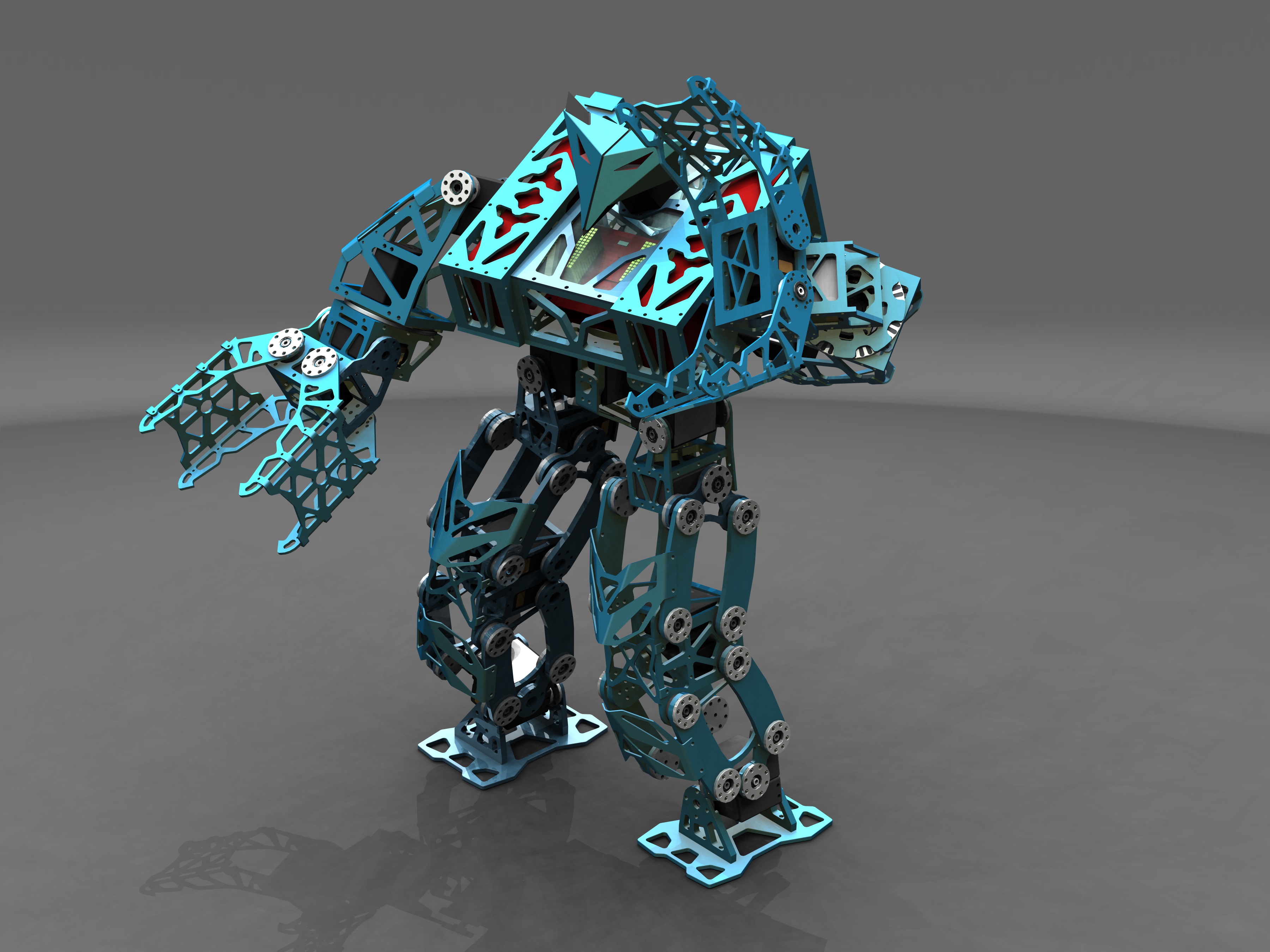 Pawel Olek is a student at AGH University of Science & Technology studying Automatic Control and Robotics, specializing in Robotics.He entered this awesome image and won our monthly student design competition. “At the end of summer 2013 I found on the Internet a humanoid robot competition that took place in Japan. I was inspired by this so I came up with an idea to build a fighting humanoid robot. After 18 months I built a cheap and simple humanoid robot. Due to my student budget which was pretty low, I struggled with a lot of limitations.  The robot constructionwas made with aluminium sheets cut by waterjets and 3d printed elements.  Having gained valuable experience in designing and manufacturing the first robot, I decided to build a second one, a more advanced and complex humanoid robot.

During the design process I tried to eliminate all the mistakes that I had made in my previous version of the robot. But I came across new ones in the process, like, for instance, the demand for higher current supply to servos which resulted in the application of two li-po batteries with a total capacity of about 7000 mAh.'”

In the meantime, Pawel became a CAD intern where he learned Siemens NX 9 software. Pawel comments “I loved this program. In contrast to the previously used Inventor it was much more intuitive , and offered many new opportunities. Work on large assemblies was incomparably easier. I decidedto Use NX 9 as the CAD program to design my second humanoid robot'”

His 2nd humanoid robot was much more complex ‘”t has more degrees of freedom, that makes his movement smoother and faster. There were also many mechanical changes, like replace bushing to ball bearing, the use of threaded inserts, replace cheap aluminium alloy to PA11and many more. I used the following manufacture methods water-cutting, CNC milling, CNC turning & 3D printing”

‘”NX is a very powerful tool for designing complex projects like mine.” states Pawel.

You can see Pawel’s humanoid robot in action in this video:

Here is Pawel (right) being presented his award by Rafal Zmijewski & Mariusz Zabielski (both on the left) from Siemens PLM in Poland at Siemens Experts Day in April 2016. You can check out our winners gallery & enter your inspiration in our student design competition.

This article first appeared on the Siemens Digital Industries Software blog at https://blogs.sw.siemens.com/academic/polish-student-creates-humanoid-robot-using-nx/