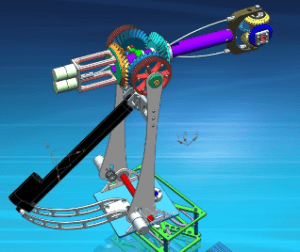 Westminster Christian Academy uses NX in a high school CAD course that is taught by a Siemens PLM employee Jeff Shultz. The school published an interesting article on the value of learning NX in high school.

All three alumni would agree that early exposure to NX software is important, not only to help students excel in the engineering field, but also in developing effective problem solving skills. De Groot, sophomore at Missouri S&T, who did not take Westminster’s CAD course while in high school, says in hindsight, she wishes she would have.

Several of their graduates go to Missouri S&T (Rolla) and now use NX in college on their Mars Rover Design Team and placed 2nd in the world last May. Previously we blogged about Jonathan’s use of NX

Here are two links from KPLR11 and KSDK to stories about Westminster’s partnership with Ranken Jordan delivering modified cars to young patients.

Here’s school’s announcement regarding their competition in Little Rock:

Regional in little Rock this past weekend!In a field of 54 teams, Westminster reached finalist

status and received a regional award.After qualifying rounds, the Cyborg Cats were selected to compete in an alliance with teams from Ladue and Lee’s Summit.The alliance advanced through quarter and semi-finals, but were defeated in the finals.At the closing ceremony, Westminster’s team was named the recipient of the FIRST Robotics Entrepreneurship Award.This award recognizes the team that has developed and implemented the most comprehensive business plan to scope, manage, and achieve team objectives.The Cyborg Cats will next compete at the St. Louis Regional on March 20 and 21.The event is free and open to the public. Come to Chaifetz Arena to see the Cats in action!

This article first appeared on the Siemens Digital Industries Software blog at https://blogs.sw.siemens.com/academic/nx-cad-training-prepares-westminster-christian-academy-students-for-future-success/