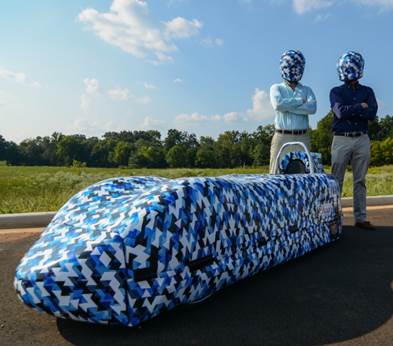 Hundreds of students around the globe will show off their electric race cars at the Greenpower International Finals race in Rockingham Motor Speedway, U.K. Oct. 10 and Oct. 11. Excitement is building for this hands-on engineering project-based learning initiative where students are challenged to build-design-race electric cars. Teams from Silesian University of Poland, Huntsville City Schools of the U.S. and Instituto Superio Tecnoco (IST) of Portugal share their Greenpower experience.

Silesian University of Technology of Poland

Michal Sobek, an engineering student graduate and a member of Silesian University of Technology Greenpower team, is responsible for designing the new body shape of their SG car. He says Greenpower was one of the best experiences of his college career because the competition gave him a chance to gain hands-on experience and challenge his engineering skills.

To Sobek, the best part about Greenpower is the chance to interact with other teams. He believes learning how other teams solve problems is a great way to enhance his own engineering skills. He also loves watching his team’s car on the race track and seeing that all his hard work has paid off.

“The day of the race is full of emotions and full of excitement. Watching our car on track makes us very happy and finally makes us satisfied that our hard work wasn’t for nothing.”

Sobek says Silesian University team faced financial and engineering challenges so they dug deep into the software for solutions. He says Siemens PLM software has definitely helped his team prepare for this race.

“We used Siemens’ NX software to model our car,” said Sobek. “We are also researching options in this software, such as CFD, FEM for strength analysis, and many others. Siemens software helps us find answers to our problems much faster…it is very advanced and reliable.”

This year, the team prioritized reducing the mass and frictions in the car to speed up the car.

“Every year we try to beat every team,” said Sobek. “The goal this year is to get to the podium of F24+ and win the Corporate Challenge.”

Huntsville City School of the U.S.

TeamUSA from Huntsville City Schools is ready for their third finals race. Ashley Kimbel is a freshman at Grissom High School and the team leader. Rob Bradford is an electronics and battery expert on the team who plans to study physics next year in college. The team will be racing Ares, their Solid Edge designed car.

Although Kimball has not had any prior interest in racing, she decided to join the team when her math teacher, Mr. Sparks, introduced Greenpower as “something new.”

“I like the fact that Greenpower is a hands-on program and gives me skills I can use in the future.”Kimbel said.

Last year, the team the team finished 14th out of 80 cars in the F24 race. For this year’s challenge, Bradford says the team focused on battery improvement to increase efficiency and recruiting new members to increase manpower. So the team expects a stronger finish this year.

The team mainly used Solid Edge for design enhancements, including a 3D printed brake light bracket and vent cover. Moving forward TeamUSA is designing their next generation car from the ground up completely in Solid Edge.

“I used Solid Edge at Whitesburg Middle School and will start using the software this semester in my design and drafting class,” said Kimbel. “Of course, the Solid Edge software will be used to design the new car that will be ready for next year’s race.”

Kimbel and Bradford expect a top 10 finish at this year’s race. One reason for this optimism is that the car has an average increase of 1 mile per hour when measured. In addition, the team tested the car at the Corvette Museum track in Bowling Green, Kentucky. Based on the qualifying times, they tentatively secured the 8th position in the F24 finals at Rockingham.

Projecto de Sustenabilidad Energetica Movel first began in 2013 at Instituto Superio Tecnico (IST). In 2014, the team finished its electric-race vehicle “GP14. EVO” is the name of their car and is the first Portuguese prototype to run in the Greenpower Corporate Challenge. Now, the team is ready to compete at the international final .

“The Greenpower program is a demanding, ambition-driven competition,” said Pimenta. “It allows not only for us to put all our knowledge to test but also pushes our creativity, ingenuity and ability to provide effective solutions to specific problems.”

Last year, the team was not successful getting its “GP12. EVO” on the track. To prevent this from reoccuring, the team redesigned lighter components and more resistant electronics. Also, team logistics were restructured to minimize mistakes and improve the track experience.

Pimenta says Siemens’ Solid Edge software allowed his team to develop complex parts easily because of its fast and simple interface. He believes the vehicle will be one of the competitive cars on the racetrack this October.

“We are very confident with our performance level,” said Pimenta. “Although just finishing the race would be a massive improvement from last year, we are aiming higher than that. We are in for a smooth operation throughout the weekend.”

Meet Team UAH – the first Greenpower Electric Car Challenge collegiate racing team in the United States.It won’t take you long, there are only two of them.Veterans of the Huntsville City Schools 2013 Greenpower team, Will Cobb and Nick Peterson have pulled off an impressive feat.In 40 days (and presumably 40 long nights), they’ve built “Shock,” a competitive electric car.

They travel to the Rockingham Motor Speedway next week to compete at the International Finals on October 10th and 11th.It’s a long trip – all the way to Corby England, where they’ll race in the Greenpower International Finals against seasoned veterans as well as newcomers.With help from their faculty advisor at the University of Alabama in Huntsville, Dr. Bill Carswell, Will and Nick found the Huntsville community to be willing contributors to raise the funds, provide materials, provide workspaces – whatever they needed.

And as the UAH teams grow they already have a long list of improvements they want to make for next year.Their excitement is contagious, even as they tell you that they haven’t slept in 3 days.No such thing as can’t be done with these guys.  Stay tuned for updates on the official Greenpower Twittter @Greenpowertrust, Facebook and YouTube.

This article first appeared on the Siemens Digital Industries Software blog at https://blogs.sw.siemens.com/academic/meet-a-few-of-the-future-engineers-competing-in-the-greenpower-finals/