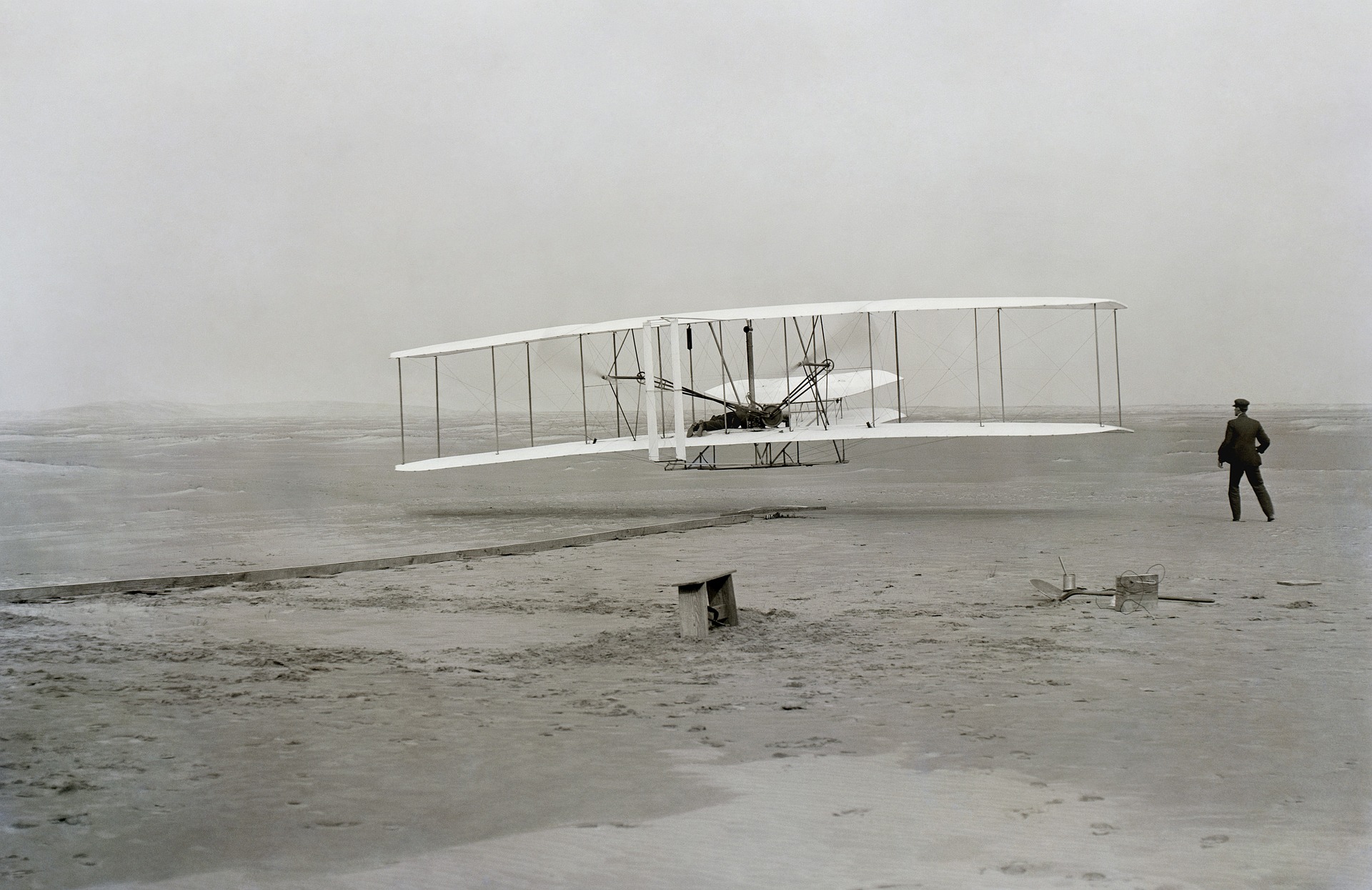 Image from user WikiImages on pixabay.com.

On this day in 1903, the Wright brothers successfully piloted their Flyer for the first time at Kitty Hawk, North Carolina, marking the first controlled, sustained, and powered flight in human history. The Flyer was a simple affair compared to aircraft today, consisting of a four-cylinder combustion engine and two propellers attached to a skeleton structure of wood and canvas, but for their time, it was a revolutionary invention that transformed the future of transportation forever. The Flyer was the outcome of the Wright brothers’ innovational spirit, a spirit that continued to drive and improve the burgeoning aerospace industry throughout the 20th century. As the aerospace industry continues to evolve in the 21st century, the triumph of the Wright brothers and the advancements in aerospace that followed serve as reminders that with a dedication toward innovation, nothing is beyond reach.

The Wright brothers were not the only ones exploring aeronautics during their time, and much of their success was accomplished by learning from experiments done by other aeronauts. The Wrights were actually bicycle mechanics before devoting themselves to aeronautics. Yet their deep passion for aeronautics and a desire to improve on what had already been done inspired them to explore new control systems that gave total control of the aircraft to the pilot, which other aeronauts lacked. They began their first experiments with a biplane kite with manipulable wings in 1899, before moving down to Kitty Hawk from Dayton, Ohio for its tall dunes and favorable winds. For the next four years, they built and tested multiple iterations of gliders, trying hundreds of wing designs and optimizing their control system with additions like a rudder. Finally, on December 17, 1903, Orville Wright changed aviation forever with the Flyer, soaring a full 175 feet in 12 seconds. They certainly were not the first to attempt flight, but the Wright brothers’ innovational mindsets are what guided them toward success.

Their impact on the world can be witnessed through the evolution of aerospace throughout the 20th century, as engineers and aviation companies around the globe inspired by the Wright brothers pushed the boundaries of flight decade by decade. Whereas Orville Wright flew only 175 feet in that first successful test of the Flyer, new airplanes would soon be able to travel across oceans, and eventually across the globe. Aircraft took on new functionalities, fulfilling vital roles in commerce and defense. This led to the development of bigger airplanes, ones that could carry tons of cargo and hundreds of passengers. In 1947, the Bell X-1 plane piloted by Chuck Yeager was the first to break the sound barrier, ushering in the era of supersonic flight. And of course, who can forget the numerous strides made in space travel, such as the Apollo missions to the Moon and the establishment of orbital stations like the International Space Station? The Wright brothers blazed the trail to the skies, setting the stage for thousands of others to innovate on their achievements and go further beyond.

Today, the aerospace industry continues to carry the Wright brothers’ innovational spirit as it transforms to face the challenges of the 21st century. Contemporary aircraft and spacecraft now integrate advanced systems of electronics and software to carry out new functions. The effort to mitigate climate change has taken center stage in the industry, inspiring endeavors into sustainable forms of aviation. There is also a revived effort to return to space, including exploratory missions to the Moon and beyond, along with commercial ventures like space tourism. All these efforts have their own difficulties and challenges, which is why many aerospace companies are turning to digital transformation to overcome them. With the assistance of the digital twin and simulation technologies, engineers can explore virtual representations of their designs before they ever build a physical model. Automation is also making strides in ways like generative design, where algorithms can utilize a set of user-defined requirements to make hundreds of design iterations in short spans of time. Digital transformation is the next critical step in the aerospace industry’s evolution, taking what the Wright brothers started beyond anything they dreamed.

With all the thrilling advancements made in the aerospace today, it can be easy to forget that the first major step leading to contemporary aerospace was done by two bicycle mechanics passionate about aircraft. While the Wright brothers certainly were not the first in their time to explore aeronautics, their tenacity, courage, and spirit of innovation are what brought humanity to the skies—and later to the stars. As the industry continues to push the boundaries of sky and space, engineers should keep the Wright brothers’ innovational spirit close to heart and remember that no matter how daunting something may seem, anything is possible.

Siemens Digital Industries Software helps organizations of all sizes digitally transform using software, hardware and services from the Siemens Xcelerator business platform. Siemens’ software and the comprehensive digital twin enable companies to optimize their design, engineering and manufacturing processes to turn today’s ideas into the sustainable products of the future. From chips to entire systems, from product to process, across all industries, Siemens Digital Industries Software is where today meets tomorrow.

Agile Product Development in the Aerospace and Defense… October 7, 2021 I had the privilege of interviewing Jim Roche of CIMdata and Dale Tutt of Siemens Industry Solutions Software on Agile…
Katherine Sheriff: Pioneering the Legal Framework of AI:… March 3, 2021 Listen to Katherine Sheriff Podcast HERE When does a machine become a person in the eyes of the law? Katherine…
Digital Part Production Overview – ep. 1 Transcript April 13, 2021 Manufacturers and machine builders are facing the challenge of increasing complexity in new machine introductions. Therefore, Digital Part Production (DPP)…

This article first appeared on the Siemens Digital Industries Software blog at https://blogs.sw.siemens.com/thought-leadership/2022/12/17/wright-brothers-anniversary-2022/