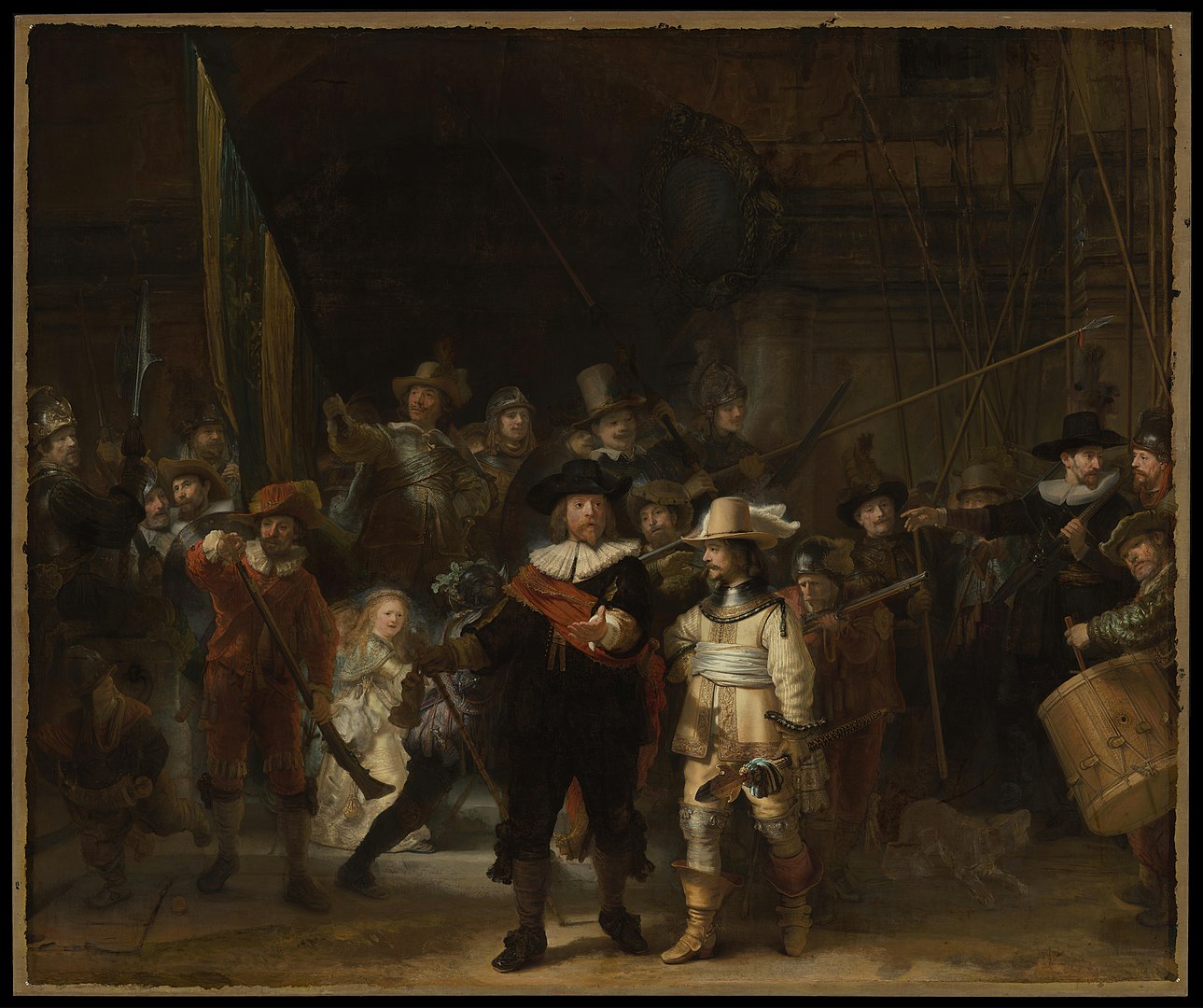 In 1642, Rembrandt, or as his mom called him Rembrandt Harmenszoon van Rijn, was commissioned and finished the painting known as The Night Watch. The folks that commissioned the painting wanted to memorialize a military group. Each of the key members of the group portrayed in the painting paid 100 guilders each for a total of 1,600 guilders, which apparently was good pocket money back then. One key element of this painting is that it measures in at around 12 feet by 14 feet.

In 1715, the painting was moved to the Amsterdam Town hall. They had a special place in mind to mount the painting on a wall between two columns. Unfortunately, that key real estate was a bit too small to fit the huge painting. So, someone took scissors to it and trimmed it on three sides! The extra pieces were tossed aside. Luckily, Gerrit Lundens created a copy of the painting (no photography back then) in its full glory before the painting surgery took place.

I can see how the ability to analyze color and brush strokes could be a real asset for other art restorers around the world. I have seen enough art restoration shows to know, the key is the remove all the dirt, smoke and deteriorated varnish on a painting to reveal the original colors. Then, learning the real colors and the brush stroke techniques could help faithfully restore paintings. I also think the brush stroke technology might also be foundational technology for analyzing art work and historical documents for forgeries.

If researchers can apply AI to restore a painting, will we someday see the artist removed from the creation process all together? An art collective called Obvious accomplished just that. Using an AI technique based on a generative adversarial network and a data set of over 15k paintings, they generated a digital painting. From trial and error experiments, the team found that the best success was with portraits of people. The adversarial part of the network compares the differences between the generated painting and the human-created paintings in the database to “judge” the results. It selects the painting that matches closest to the human-created painting. Apparently the paintings in the database represented the old masters including Rembrandt. While it is not clear from my research if the AI-generated painting is actually rendered on canvas somehow, just a print of the digital image or just bits on a hard drive, it did sell at auction for $432, 500 (plus commission of course) in 2018. For that kind of cash, it should come with a very nice easel. In its own free house. I guess this price must be due to the novelty of the painting, because to my untrained eye, it looks pretty awful. But just recently, someone paid a lot of money for an invisible sculpture, so I cannot judge people’s taste in art.

Putting aside what our talented artists in the world think about AI-generated paintings, what would Rembrandt think? He died in 1669 at the ripe old age of 63, but as my grandma used to say, “He would probably be spinning in his grave.” I am not sure where that phrase came from or what it actually means, but I guess that he would be furious. On the other hand, I think he would be very happy that his original masterpiece has been restored (at least digitally).

Susie Wolff, Driving Force for Sustainability & Diversity,… February 2, 2021 Listen to the Susie Wolff Podcast HERE I had a great conversation with Susie Wolff, the first women in 22…
Endless Possibilities of STEM education -Beth Paretta of… July 21, 2021 Endless Possibilities of STEM education -Beth Paretta Pt. 2- Listen HERE There are certain moments in history that everyone remembers.…
The Future Car - The verification and validation of… April 15, 2022 In a recent episode of the Future Car podcast, I talked with Nand Kochhar, VP of Automotive and Transportation, and…

This article first appeared on the Siemens Digital Industries Software blog at https://blogs.sw.siemens.com/thought-leadership/2021/07/01/from-the-grave-rembrandt-inspires-ai/