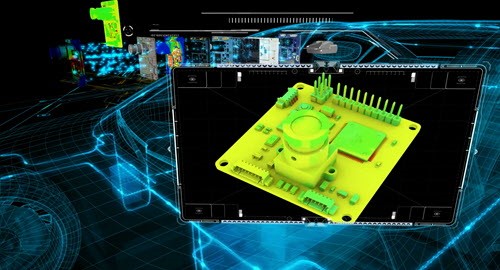 PCB thermal simulation and analysis will play a major role in developing the next generation of mobility. Autonomous and electric vehicle’s software and electronics content is exponentially growing past what’s currently required by vehicles, meaning that the next generation of electronic circuit boards will be required to have the utmost design robustness to guarantee functionality and safety. One aspect that will be key is ensuring that heat won’t be an issue in causing parts of the circuit board to malfunction.

PCB thermal simulation and analysis is extremely valuable to evaluate cooling concepts to achieve these improvements. Two main factors drive the thermal performance of an electronic system: the power of the components, and the environment around the electronic module.

As new technologies are pioneered, many changes are made to the system. Software is often considered the easy way to address functional shortcomings of a system.

While it may be easy to change lines of code, the resulting consequences on operational temperatures can be catastrophic.

I’ve been involved in fixing problems before launch that were triggered by apparent benign software modifications. Changing duty cycle from 50 to 70 percent may be simple to encode, but the resulting temperature impacts on the metal-oxide-semiconductor field-effect transistor (MOSFET) can exceed die temperature ratings, resulting in early failure.

Fast and easy to implement, PCB thermal simulation is mandatory to evaluate such changes so as to not slow the product development process.

Environment around the electronic module. The environment is another area to incorporate into PCB thermal simulation.

In the latter part of the 20th century, most electronics were placed in relatively stable thermal environments, like the dashboard. However, as packaging space, wire harness length and location became more important, electronic systems were often placed in more inhospitable locations. In one instance, an electronic module was placed underwood near the exhaust manifold.

For newer advanced driver-assistance systems (ADAS) and autonomous vehicle technologies, it may not be so obvious that a location is problematic. For instance, ADAS cameras are mounted at the rearview mirror, high up in the windshield area.

However, use-case scenarios need to be thought out. For example, on cold mornings, the first thing to turn on could be the heater’s defrost. This generates a blast of hot air that blows directly on the camera module. Quick thermal changes are trouble for such systems. Likewise, desert locations can wreak havoc due to solar thermal radiation, causing high temperatures on ADAS cameras. The first thing a driver will do upon entering the car is turn on the air conditioning, blasting cool air right onto the camera.

Until recently, such temperature conditions were mitigated by putting electronics in thermal friendly locations in the car. But as development moves forward, the electronics have to be more robust and reliable to survive the new environments demanded by advancing vehicle technologies. Digitalization can help simulate, validate and verify the electronic systems with greater speed and efficiency.

This concludes the seventh part of our series on electronics systems and the challenges to provide solutions for products of the future. In our next article, we explore conducting stress analysis on electronic systems. If you wish to start from part 1, please click here.

About the author
Greg Roth is the director of automotive and transportation solutions in the Industries Group at Siemens PLM Software. In his current role, he champions CAD, CAE & PLM technologies and processes for companies at a global enterprise level so they can achieve substantial reductions in product development costs and time while improving overall quality. He previously held positions at Ford Motor Company, Eaton Corporation and Amcor Packaging. He was also chief engineer for the CAE and NVH departments at ZF-TRW Automotive North America Braking Systems in Livonia, Michigan. Greg holds an master’s degree in mechanical engineering from the University of Michigan, a master’s degree in electronics and computer controls engineering from Wayne State University and a bachelor’s degree in mechanical engineering from Michigan State University.

3 thoughts about “PCB thermal simulation: why heat is the enemy of reliability – part 6 of 8”

This article first appeared on the Siemens Digital Industries Software blog at https://blogs.sw.siemens.com/thought-leadership/2019/05/06/pcb-thermal-simulation-why-heat-is-the-enemy-of-reliability-part-6-of-8/