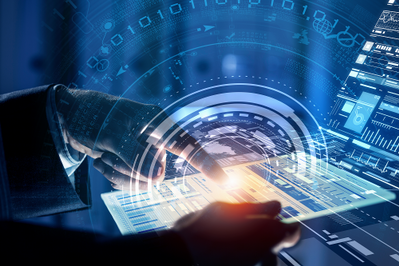 In the previous blog, How the digital factory made an eyewear company more competitive, I discussed the adoption of digital manufacturing and digital twin within a small company producing lenses for prescription eye glasses.

Now, I would like to discuss the adoption of digitalization and the digital twin within a bigger company as part of industrial digitalization.

For bigger players, like a machine vendor that produces machines for printing on special paper or bottling machines used in the pharmaceutical industry, the process of deploying industrial digitalization is challenging, but far from impossible.

Let’s assume you produce machines for the bottling industry. In your case, each machine is a smart device. Smart means that the design and production of each machine includes mechanical, electronics, software and wire harness design, which later must be verified and produced.

If you break down the digital twin capabilities, you can see where the different entities are represented and how the technology supports and enhances the performance of the factory:

1. A digital twin of the product represents the way the product was designed, including design elements such as mechanical, electronics, software, automation and control, or wire-harness.

2. A digital twin of a manufacturing process represents the required processes to produce the major components of a specific machine and assemble them.

3. A digital twin of a manufacturing line or a production facility represents the bill of equipment and the requested layout needed to build a specific machine or a batch of machines. In today’s world of individualization where it’s common to support a lot size of one, this production system is flexible and can easily and automatically be reconfigured.

4. A digital twin of production represents the technical package and the production of components, subassemblies and the assembly of a full-size machine.

Once a machine is out and operating at a customer’s plant, the machine vendor will be able to offer the end user the ability to connect the machines (while in operation) to an Industrial Internet of Things platform, which enables data collection and feedback of information back to the end users: production/assembly system and the digital manufacturing planning and design teams.

It sounds like a lot of digital twins, but think of the benefits to business: the ability to validate the product from design to production in the digital space. This helps reduce costs, improve quality of the product, increase utilization of the production system and, moreover, reduce delivery time by months – increasing the system’s competitiveness.

Key challenges of the current state

Transitioning to industrial digitalization is fraught with challenges, including taking a “not invented here” or NIH stance prohibiting the usage or purchase of existing products and research.

Another major factor is thinking that “if it isn’t broke, why fix it” mentality. There is often a strong reluctance in accepting new processes and learning new tools, even spending money on new production equipment when adopting digitalization would be a better investment. As the workforce ages and nears retirement, companies risk losing the knowledge their current employees hold – a recognized skills gap already presents a struggle in recruiting from colleges and universities.

Manufacturers are embracing digitalization, but the pace remains slow. Current production is paper-based, which lowers productivity and increases missed production schedule. On top of that, a significant amount of time is spent in search of information.

Through my decades of experience working with manufacturers gearing up for digitalization, I have found the following steps to digitalization to be a viable path for almost any organization.

1. People: It is critical to assign a program leader and build a digitalization team both internally and using some external support.
2. Planning: Develop a step-by-step digitalization plan for the next generation digital machine shop.
3. Products: Collect and organize currently known products and product families to be produced in the near and midterm future. Make sure all necessary digital product information is available, this includes all “technical packages” plus all the quantity information.
4. Define the type of machine shop to develop: Will this be a cellular machine shop, a job shop, a mixed shop? Plus external type of stations, such as heat treatment, coting, quality assurance, measurement and packaging will need to be defined.
5. Define the high level machine shop layout.
6. Based on the products and layout, several simulation models validating the number of machine per type, flow, throughput, utilization, electricity consumption and number of shifts will need to be developed.
7. Develop a digital twin of a factory, its production cells and critical machines.
8. Using the information from the previous step, develop the picture of required automation for the production facility, such as programmable logic controllers, networks, distributive numerical controls, or advance planning and scheduling systems.
9. Once it is determined which automation systems will be used, update the digital twin of the production facility.
10. Close the loop by fully-integrating the enterprise resource planning system with the manufacturing execution system and the engineering backbone.
11. Validate the “digital technical package” to ensure it contains all required information needed to turn a blank into a part.
12. Supply training material in the form of a digital machine shop: an ebook should be developed in parallel with training material and will be used for frontal, online and on-station training sessions. The value of digitalization

The expected values from changing to digitalization and a digital machine shop is monumental and can begin paying off in as soon as 6 to 8 months, although that depends on many factors. Regardless, manufacturers adopting digitalization can see the following improvements:

We have found that deployment takes a step-by-step approach for maximum efficiency. Splitting the big elephant into small mini pilots, generally 9 weeks long, often proves visible value quicker than when other strategies are implemented.

This roadmap is not limited to greenfield projects where you’re starting a project without the need to consider any prior work – it can also be used for digitalization of existing production facilities. It’s possible to take a machine shop and turn it into a digital machine shop.

Although end-to-end processes are sometimes supported by systems coming from different vendors, the opportunity to build the digital factory exists, regardless of how the current manufacturing process I set up.

Granted, this may seem daunting at first. But the benefits of embracing a digital twin will allow manufacturers to remain competitive in an ever-increasing digital world.

I have found the most successful path to industrial digitalization involves these four building blocks:

1. People and working methods, leadership and governance is needed to perform the change.
2. Software and hardware is used to support the entire workflow and guide the new processes
3. Automation and control enables the digitalization of the production systems
4. Other company assets like knowledge, experience and reputation are needed in order to attract new talent, which will become critical to the success of the process.

We will go more in-depth with these building blocks in our next post.

About the author
Zvi Feuer is senior vice president of Manufacturing Engineering Software for Siemens PLM Software, a business unit of the Siemens Digital Factory Division. He has more than 25 years of experience in Enterprise Software business management, with a primary focus in the Manufacturing Industries. He has worked for: the Israeli Aircraft Industries (IAI); Digital Equipment, a leading provider of d system integration projects; and since 1995, with Tecnomatix, UGS and Siemens. Feuer’s current responsibilities include leading global teams and initiatives to develop and service customers worldwide and providing Manufacturing Engineering Software solutions. These solutions include optimizing production and service facilities, assembly line design, developing and validating production systems and programming CNC machines in major machine shops. Feuer received his Master of Science in industrial engineering from Technion – Israel Institute of Technology, and also received an executive MBA from UCLA – NUS.

This article first appeared on the Siemens Digital Industries Software blog at https://blogs.sw.siemens.com/thought-leadership/2018/12/26/how-to-forge-a-path-to-industrial-digitalization/