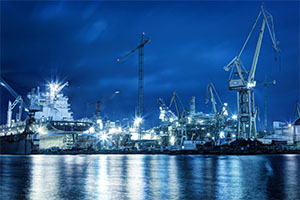 Changing the course of a ship that weighs more than thousands of tons takes coordination and collaboration. So does shipbuilding. But to meet the needs of today’s ship buyers, shipyards themselves have had to move in a new direction.

Advances in digital shipbuilding technologies for large-scale production are transforming marine engineering and naval architecture, making the design and construction of modern ships more efficient and affordable. Equally important, digital shipbuilding technologies are helping to lower the total cost of ownership for new ships throughout their commission, no matter what duties are assigned to them.

In one example of how digital technologies have changed shipbuilding, Newport News Shipbuilding (NNS) is piloting several programs to create a digital shipyard, including “drawingless” plans for the Enterprise CVN-80 aircraft carrier.

At the Navy League’s Sea-Air-Space Exposition last May, NNS president Matt Mulherin said that creating an integrated digital shipbuilding environment could generate cost savings of more than 15 percent on the new ship.

“If we are able to successfully do this with representations of the ship — the compartments, the space, the foundation, or the pump — when the ship is delivered, that representation is what the sailors will be using when they take care of the ship for the next 50 years.”

Digital shipbuilding technology is helping total costs of owning new ships throughout their commissions, no matter their assigned duties.

The digital drawing board and beyond

Shipbuilders are following other producers such as industrial machinery makers in digitalizing their work to create a standardized, unified, coordinated infrastructure for designing, producing and maintaining ships.

Prior to the adoption of digital shipbuilding technologies, design and planning workflows in large-scale production projects were separated and contained in discrete, unconnected platforms with limited capabilities. This model prompts a lot of sending of plans back and forth among separate teams to reconcile changes. Not only does this contribute to lengthier production schedules, but it also increases opportunities for mistakes.

What’s worse, a lack of real-time collaboration limits opportunities for discovery of design options that could improve a ship’s capabilities, accelerate its construction and reduce costs.

Digital shipbuilding technologies mitigate these issues by uniting innovative planning tools with a singular repository of always-current design data. All ship-related data becomes a single thread of shared knowledge and truth throughout the product lifecycle.

Now everyone throughout the digital shipyard who works on that project has the information they need, no matter where they are or where the ship is in its lifecycle. And with the extension of the digital shipbuilding platform to all partners, members of the supply chain, and fleet support teams, ship design and building costs become more affordable.

By extending the digital shipbuilding platform to all partners, supply chain members and fleet support teams, the costs to design and build ships come down.

Over the years, naval architects and marine engineers have become more adept at crunching numbers to determine if their designs will meet performance requirements. But with the help of 3D models, augmented reality and predictive analytics, digital shipbuilders can now simulate multiple in-field scenarios to improve design specifications even more.

With this shipbuilding technology, ship builders and ship operators can identify potential problems early and make adjustments quickly. This speeds the completion and effectiveness of any project, whether it’s testing a system for a ship under construction or improving the performance of ships already in use.

If a ship class needs to be retrofitted for a new application, having a reliable digital record of the class’s design helps engineers and architects more efficiently determine the changes to be made. In addition, they can use advanced simulation technology to identify optimal redesigns given project constraints.

The creation of a modern ship’s digital twin is key to ensuring its extended use. As virtual versions of active-duty ships, digital twins can be employed to support a variety of tasks, ranging from understanding the impact of a future deployment, to enabling remote service technicians to help address serious malfunctions on ships at sea.

Naval vessels routinely respond to events that may stress the ship’s integrity. With a reliable digital twin, marine engineers can run what-if scenarios to determine if a ship can tolerate a new assignment.

During an emergency, remote technicians can use a digital twin to help on-board crew identify and resolve problems. Considering the dangerous conditions in which naval vessels operate, remote technicians may need to be required to take over for incapacitated crew members.

Ship maintenance can be very expensive and result in extended out-of-service periods for some ships.

When digital shipbuilding technology supports the whole shipbuilding process, major overhauls and future modernizations of fleets can be completed more efficiently. Incorporating real-time data into a ship’s digital record can identify necessary maintenance activities, enabling everything from the assignment of labor to timely procurement of supplies. Digital information of first-of-fleet vessels can be used to enhance ships under construction or planned for future launch.

Sometime in 2018, construction will begin on the USNS John Lewis, the first replenishment oiler built by the U.S. Navy since 1995. Its primary mission will be to fuel ships underway and ensure a steady flow of jet fuel to aircraft-carrying vessels. It will also provide a variety of other supplies to ships at sea.

But if the John Lewis stays in service as long as older replenishment ships have — the newest has seen two decades of service — it’s likely that its role and those of the 16 planned ships in its class will shift during the length of their commission.

If construction of the John Lewis is supported with digital shipbuilding technology and practices, ensuring a long life, no matter what it’s assigned to do, it shouldn’t be a problem.

This concludes the introduction to our digital shipyard series.

Tim Nichols is the Director of Marketing Communications for the Global Aerospace, Defense and Marine industries at Siemens PLM Software, a business unit of Siemens’ Digital Factory division. He has more than 30 years of experience in aerospace and defense, which spans product management, marketing, new business development and business management. Tim spent nine years of active duty with the United States Navy. He is a graduate of the U.S. Naval Academy and holds two graduate engineering degrees from the Massachusetts Institute of Technology in Cambridge, Massachusetts.

This article first appeared on the Siemens Digital Industries Software blog at https://blogs.sw.siemens.com/thought-leadership/2017/05/15/digital-shipyards-how-to-maximize-investments-in-a-modern-fleet/