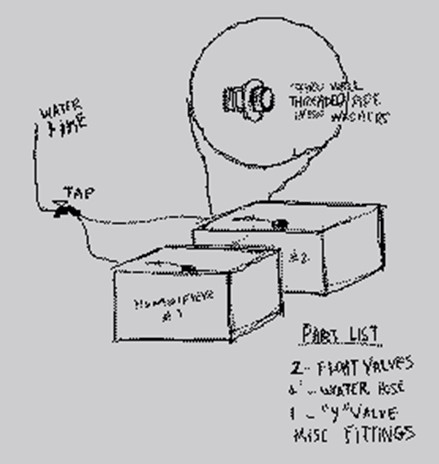 As product complexity grows and recalls increase, companies are realizing that identifying problems after they occur isn’t as effective as identifying them before. However, implementing a plan to catch problems is difficult because management and accountants need to be convinced of why the plan and all of its expenses are justified.

But what if you could point to a documented experience that shows them why model based systems engineering is a necessity? This is where our vast, valuable experience comes in.

In this series, Mark Sampson explores why companies need this systems engineering in place. In part one, he discussed how the increase in product recalls could be tempered with model based systems engineering. Here, he shares his story about how not having a plan allowed a humidifier to wreak havoc on a company and its employees.

This is a true story, but no one noticed the total cost because it happened over a number of years. Many of you will recognize similarities with your own experiences and projects. You’ll also see early on how a model based systems engineering plan could have prevented a lot of the problems we’ll cover.

Many companies extensively use electrostatic plotters. Their high speed and high quality output are used for plotting drawings, circuit boards and schedules. The electrostatic drawing process, which involves magnetically charging a point on paper, requires specialized environmental conditions, including controlled temperature and humidity levels. These computer room conditions are ideal, and these work horse plotters are often collocated with the computers used to create the drawings.

During the new site’s expansion, computer room space was at a premium with no room for peripherals. To make room for additional computers, the plotters would be moved to a centrally located area where everyone could easily access their drawings. Facilities created a small room where the plotters could be situated. The requirement that the room maintain a 50 percent humidity level meant that a humidifier had to be in the room due to dry weather and dehumidifying furnaces.

Commercial grade humidifiers which could handle the load were expensive (roughly $10,000) and would require specialized plumbing, conditioned water and additional air conditioning capacity. Since facilities hadn’t budgeted engineering time or forecasted capital dollars to purchase and install such a unit, they opted to buy a household humidifier from Sears that cost about $60. They rolled it in, plugged it in and turned over the owner’s manual. This is an example of the type of humidifier that will pop up in this story of why model based systems engineering is important.

Within the first few days, the single humidifier couldn’t maintain the required humidity level, so a second $60 Sears humidifier was purchased and plugged in. Each humidifier evaporated about 10 gallons of water per day. Two 5 gallon buckets were acquired, and two trips to the nearest custodial closet were made to fill the humidifiers each morning. No one wanted to fill the humidifiers, so the low man on the totem pole was relegated to the menial task of hauling water.

After several complaints to the drafting manager, the task was added to the morning duty roster of non-exempt drafting folks and the job rotated on a daily basis. Policies were worked out for exemptions during vacation (trade with someone), disabilities (a doctor’s note) or gender (bonafide weight lifting restrictions).

Not everyone was careful during their trips and water was inevitably spilled along the way. Several slips and falls were accounted for and written up with “water on the hallway floor” as the culprit. It wasn’t long before someone threw out his back hauling the heavy containers, resulting in an expensive workman’s compensation claim.

If that wasn’t enough, the task began showing up on the yearly attitude survey, so a number of lengthy meetings were called to figure out why the drafting department’s job satisfaction had taken a sharp fall. A quality improvement team got involved and suggested running a water line to the humidifiers with a tap and hose to fill them.

After some brainstorming, the team took it a step further and recommended hooking up the humidifiers with a float valve (about $10 worth of parts) so the humidifiers could fill themselves. They won quality improvement idea of the month and lunch on the company.

The idea, which was drawn on the back of a napkin, was handed over to the building maintenance department to begin engineering the job. They decided that since float valves can fail (that is, they can stay open), they needed a double redundant, fail-safe system with dual, electric servo valves, electric-eye sensors and redundant float-valve cut-off switches. The system was installed over a weekend on double overtime so the humidifier wouldn’t be offline during production. The engineering and material bill came to $7,800. This is the original ‘back of the napkin’ drawing to show how the water would hookup to the humidifier. This is what the customer wanted. This is the final product based on the drawing.The problems begin

The first failure of the automatic refill system happened over a weekend and flooded the building. We were greeted by an inch of water over several thousand square feet. Maintenance found that a copper sliver had gotten stuck in the valve and they quickly resolved the situation. They turned off the water, blew out the pipes, cleaned up the water and rented special high speed drying equipment. The drywall was damaged and needed to be replaced along with the carpet, which had grown mildew. This cleanup was expensive.

The second flood happened as a result of a power failure, which enabled a miswired servo valve to open when no power was present. Luckily, the power outage was only several hours and during regular business hours.

Unfortunately for us, the problems were just starting.

These humidifiers also needed a maintenance agreement. Sears was contacted about a service agreement, which it didn’t offer – who’d want an expensive agreement for a $60 humidifier? So, a preventative maintenance schedule was created. Spare parts were ordered, part numbers were assigned and incoming inspection drawings and procedures were implemented.

A quality improvement team came in and used a Pareto analysis to identify which parts failed most often and were critical to keep in stock. The team won quality improvement idea of the month for eliminating nearly 20 parts from stock that were at the six sigma failure level, saving the company about $2,000 per part.

The problems get worse

A rash of respiratory problems and illnesses were reported in the area. An expensive sick building study was ordered to see if environmental conditions were contributing to the noticeable increase in reported sick days appearing in overhead accounts.

The audit identified the humidifiers as a potential source. Cultures were taken, which confirmed the humidifiers as a major contributing factor to the illnesses. The automatic filling system wasn’t designed for quick disconnect as originally intended, so it took an electrician and a plumber several hours to unhook each humidifier. Once unhooked, a chemical approach was used.

Chlorine bleach was regularly added to the humidifiers and to the weekly job roster. Chlorine is considered a hazardous chemical, requiring a new vault to store the chlorine bleach. All personnel in the area took special classes on handling hazardous chemicals. The site HAZCOM documentation and chemical warning signs were updated to reflect the new chemical use. Additional procedures were put in place for disposing empty bleach containers.

But dosing the humidifiers with bleach wasn’t an exact science. Spills occurred, clothes were ruined and the brown carpet had its share of white spots. Lab coats and safety glasses were soon required when adding the chlorine.

Chlorine wasn’t allowed after this incident. Maintenance began charging $300 per month for overtime and off-shift work to have facilities engineers disconnect, clean and reconnect the humidifiers.

When the site shutdown was announced, there were rumors the facility was closing because it just wasn’t productive enough. It wasn’t making enough money and employees weren’t happy. We all knew it was the humidifiers.

This concludes part two of our model based systems engineering series. In part three, Mark Sampson points out important takeaways from this cautionary tale that all companies should incorporate into their business plans. Stay tuned.

Mark Sampson is a product manager/evangelist on the System Driven Product Development Team. He is responsible for integrating systems engineering and requirements within the product lifecycle management (PLM) business at Siemens. His work with this integration helps customers enable systems engineering and its requirements to participate and influence all aspects of product development.

Note: Parts of this story previously appeared in Volume 30, Issue 8 of Computer originally published in 1997. More information on that article may be found here.

This article first appeared on the Siemens Digital Industries Software blog at https://blogs.sw.siemens.com/thought-leadership/2016/08/22/why-do-companies-need-model-based-systems-engineering/