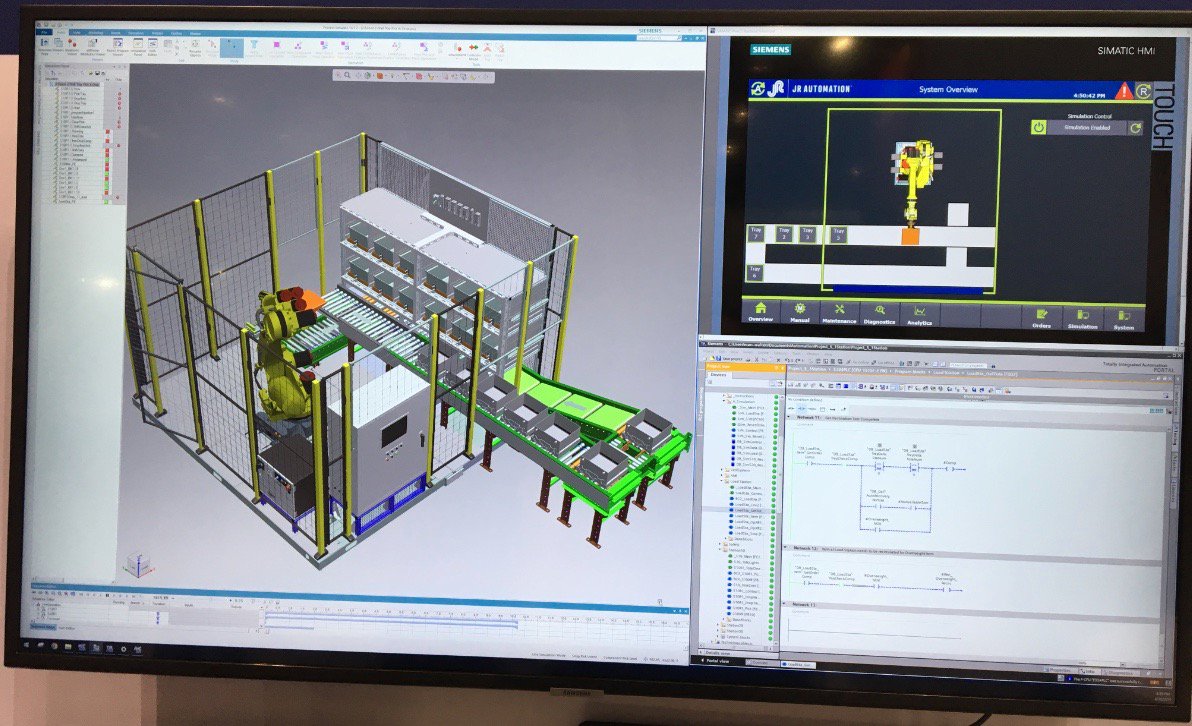 This article “Virtual Commissioning of a Robotic Cell,” was published in Automation World, July 25, 2019, and was written by David Greenfield , Director of Content/Editor-in-Chief.

Digital twin technology has been generating a lot of buzz over past the past few years. While the potential for the technology is broad—from detailed remote maintenance and repair to artificial intelligence-enabled process optimization—the rubber is hitting the road early for this technology around virtual commissioning.

Automation World recently covered a digital twin application for virtual commissioning in an article detailing Burr Oak Tool’s use of the technology to reduce time to market for its equipment and to train tool operators. More recently, we learned that JR Automation, a supplier of intelligent automated manufacturing and distribution technologies, is using digital twin technology to virtually commission a robotic cell developed for material handling applications.

The target application for the RFSS is, essentially, “any operation that sorts product,” said Cagle.Potential customers include e-commerce companies like Amazon and Walmart, as well as the automotive, defense, and aerospace industries for kitting, sequencing, and kit assembly operations.

Cagle noted the RFSS was designed to be easily scalable, placed into tight footprints, and capable of interfacing to “virtually any delivery system—from conveyors, to autonomous vehicles, to fork trucks.” The size of items the RFSS can sort is limited only to the payload of the industrial robot used in the system, he said, robots in the prototype system have a lifting capacity of 165 kg but some are capable of up to 1350 kg (2975 lbs).

“The design of the RFSS also limits down time due to maintenance activities,” Cagle added. “During maintenance on a multi-robot RFSS, a single robot can be bypassed while the others continue to run.”

According to Cagle, the typical development process for this kind of robotic cell involves programming and mechanical design teams working together, but this collaboration doesn’t tend to happen until those teams are on the shop floor physically building the system. “With early virtual commissioning, you can see if the locations where you’re expecting to mount devices may be wrong—or the space needed for those devices may be missing,” he said. “Virtual commissioning provides early feedback to mechanical personnel, so they don’t have to scrap real world designs later.”

He added that having the ability to visualize the complete system in advance of the build means that the customer can also have input to improve the design and help highlight potential safety issues.

JR Automation built their simulations of the robotic cell in TIA Portal, using Siemens Simatic S7-PLCSim Advanced to incorporate real world PLC and HMI data. With this combination of software, “we’re not just simulating a robot, were bringing all the real-world devices in the system into the 3D world,” said Walters. This allows for complete virtual debugging of the devices, he said. “Robot manufacturers have simulation tools for their robots, but nothing around it. PLCSim Advanced brings all this together.”

Using TIA Portal with PLCSim Advanced, “you can communicate with the simulated environment and the hardware on the floor,” Walters explained. “This software brings robots, PLCs, and HMIs together so that you can see all interlocks and handshake signals to determine if anything is missing. For us, the digital twin means that we can run an entire virtual material handling system on a PC. The PLC dictates how the robot handles materials and we can verify it in PLCSim Advanced. Then we use PLCSim Advanced to simulate the HMI in remote mode for debugging and commissioning.”

Walters added that JR Automation also uses Siemens Process Simulate to create digital scenarios with multiple machines, robots, conveyors, and sensors. With Process Simulate, you can verify reach and cycle times, and do event-based simulations, he said. Having the ability to do this in one environment means that there’s “no need to know multiple software or robot packages. It’s robot agnostic and shines with multiple robots.”

As with the Burr Oak Tools virtual commissioning application referenced above, a key aspect of this JR Automation project is the high-speed PLC connection to the simulation.

Cagle said they know they saved weeks of debugging time with this combination of software, but total ROI (return on investment) remains to be determined. “This is the first project we’ve done with this and we just completed it in April,” he said.

Beyond initial ROI, another benefit Cagle highlighted is the ability for JR Automation to use this software to train users on use of the system. “In this virtual world, people can push buttons and try things to see what happens,” he said. “Also, we can make faults happen in the virtual world to train users on how to effectively recover from them.”

Read the story at AutomationWorld.com here. This article first appeared on the Siemens Digital Industries Software blog at https://blogs.sw.siemens.com/tecnomatix/siemens-jr-automation-featured-in-automation-world-virtual-commissioning-of-a-robotic-cell/