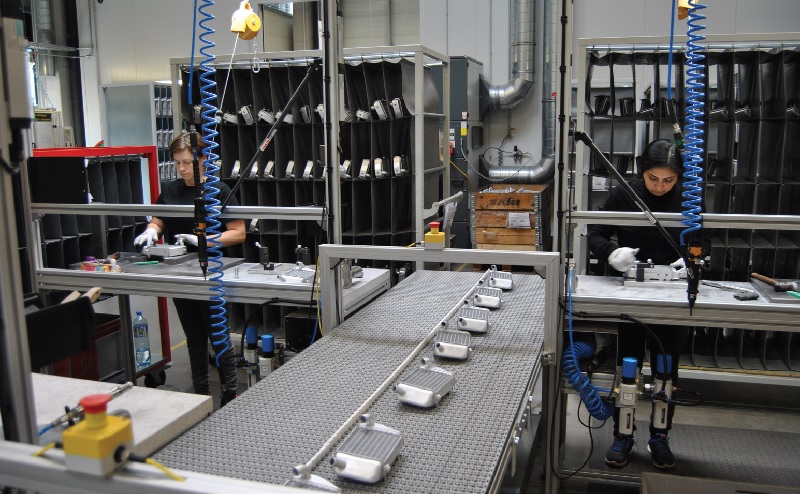 Originally founded in the Netherlands in 1977, WP Group part of the KTM/Husqvarna Group and based in Austria. While WP Performance Systems GmbH develops suspension components such as shock absorbers, steering dampers, front forks and frames as well as exhaust systems for motorcycles, WP Components GmbH designs and manufactures oil and water radiators for motorcycles and performance vehicles. Whenever there is a trophy to be won in motorcycle racing, you will find components and subsystems of the WP Group at the starting line.

WP Performance produces 400,000 radiators per year in more than 200 different custom-made products. Although this quantity is not particularly high for automotive components, the volume has grown rapidly since the production facility opened in 2012, and so has model variety. Increasingly, assembly workers had to work overtime to meet the production requirements. In his bachelor’s thesis at the Technical University of Graz in 2014, Fabian Steinbacher, project manager at WP Performance Systems, conducted a material flow analysis of the radiator assembly process.

In a second project, Steinbacher investigated the feasibility of various concepts to rearrange the radiator assembly. To build and optimize the digital twin of the radiator assembly facility, he used the Plant Simulation solution in the Tecnomatix® portfolio. The software enables him to simulate different scenarios in a realistic manner, optimizing the internal material flow. Using the 2D and 3D capabilities of Plant Simulation, Steinbacher was able to create a functional model of the entire radiator assembly facility, including the workers at their stations, within a few weeks. This article first appeared on the Siemens Digital Industries Software blog at https://blogs.sw.siemens.com/tecnomatix/plant-simulation-software-used-to-redesign-assembly-facility-for-automotive-parts-manufacturer/