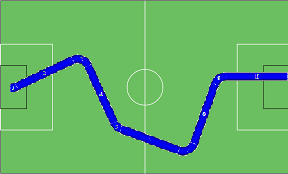 Have you ever dreamed of being the best football player the world has ever seen?

As a fellow World Cup fan, I am very pleased to announce the creation of our Simcenter Amesim Football library.

This new library focuses on the simulation of footballs, players and the field they interact on. Let’s take a look!

Simcenter Amesim is known for its parameter setting tools, enabling users to use models at the pre-sizing stage, when limited data is available. The Battery Pre-sizing Tool generates battery characteristics from a few performance parameters. The Electric Motor Tables Creator computes characteristics for an electric motor considering its architecture and high end performances.

The new Football library is no exception, including a new Player Pre-sizing Tool. With only a few high-level parameters you can create physical player models:

This tool is used by teams all over the world to make important player decisions.

Another key advantage is the rich platform that comes built into Simcenter Amesim. One of the many standard features is the Simcenter Amesim Study Manager, which provides a set of techniques you can use to explore your design space. For coaches this means exploring ways to optimize player performance. “One advantage to using the Design Of Experiments (DOE) in Simcenter Amesim is I can run hundreds of scenarios in a few minutes, testing out new strategies. And best of all, digital twins never get tired!” To test chassis models on realistic ground environments Simcenter Amesim provides the Track Generator, a pre-processing tool used to generate a description of a ground.

One of the big challenges of full field simulation is that simulating a large number of players can sometimes increase the CPU time.

So just like the Modular Piping feature that has been developed for Pneumatic and Thermal hydraulic libraries in Simcenter Amesim, the Football library includes Modular Passing: models that can simulate several team players. The players can be modeled individually or by using a simplified model where the complete pass-play is considered. And this simplified mode leads to a computation time gain.

To top it all off, a new demonstrator highlighting the usage of the new Corner Kick Design feature which is based on the 3D Mechanical library. In this demonstrator we visualize a perfectly executed corner kick goal. And thanks to the replay feature we can visualize it from all the angles!

I really hope this new library meets and exceeds all the World Cup fans’ expectations, and will help our customers become the next World Cup champions!

Want to learn more about other football-related capabilities of the Simcenter portfolio? Read this blog about the aerodynamics behind Cristiano Ronaldo’s free kick.