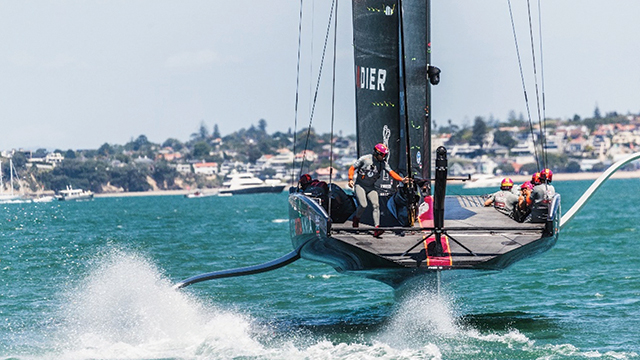 In the 36th edition of the America’s Cup no physical testing is allowed which makes simulation-driven digital twins key to the virtual design and testing process.

This weekend INEOS TEAM UK will compete against Italy’s Luna Rossa Prada Pirelli Team in the final of the Prada Cup. At stake is the chance to face Emirates Team New Zealand in 36th America’s Cup. The final of the PRADA Cup is a best of 13 series of matches, held off the coast of Auckland in New Zealand.

Unless you’ve seen it with your own eyes, you won’t be properly able to understand the speed or magnificence of these “flying boats”. Travelling at speeds in excess of 50 knots, they rise majestically out of the water: 7.6 tonnes of boat and crew, propelled by massive vertical wings,  suspended implausibly above the water on small carbon fibre foils. Television coverage doesn’t really do justice to the spectacle.

The staggering thing about these beautiful racing boats is that they are designed almost entirely using simulation-driven digital twins, that predict every aspect of sailing performance. Under the AC75 class rule, physical testing in wind tunnels or towing tanks is not permitted. In addition, teams are limited to building only two race boats with a maximum of three rigs, four rudders and three pairs of foils, so there is very little room for error.

INEOS TEAM UK uses Simcenter STAR-CCM+ software for the company’s CFD simulations and Simcenter 3D software for structural analysis. Recognizing the value of the comprehensive digital twin in such a fast-paced design environment, the team also relies heavily on Siemens’ NX™ software for computer-aided design (CAD) and Teamcenter® software for product lifecycle management (PLM) to build a complete digital model that can be leveraged by the whole team – from designers to boatbuilders as well as by the sailors – throughout the boat’s design and lifecycle.

There is no second: Siemens and the race for the America’s Cup

“These are entirely new boats, the AC75 foiling monohull,” says Dave Jonson, Team Leader – Structures at INEOS TEAM UK. “It’s a large boat at 75 feet long that travels at high speeds. The challenge with developing something from the ground up is that just about everything needs to be invented. And the first boat we build needs to be competitive from the start.” That leaves only three years from the time the rules were announced until the race begins, an extremely short time to conceptualize, design, manufacture and begin to race a completely new boat from scratch. Foiling monohulls are a very recent development in the sailing world.

“We only have one shot at winning the America’s Cup, and simulation is key to understanding many aspects of the boat,” says Johnson. “With so much freedom, the challenge is choosing the right engineering direction for the different areas of design, such as aero, flow and structure.” In other words, with such a limited amount of time, INEOS engineers face a challenge to determine what will be the right engineering and design path to take before working out the details. With so many possible directions to go, they must determine the best path that won’t lead to a time-draining dead end.

In order to win the 36th America’s Cup, boats have to be competitive across the wide range of possible sea and wind conditions that they might have to face in Auckland.

“With only two physical boats, you have to go through as many design iterations as you possibly can in simulation,” explains Max Starr, CFD engineer at INEOS TEAM UK. “But to account for all the possible wind speeds, sail choices and boat states, we need to run thousands of simulations to understand how well each design will perform on the water”

“At the start of the campaign, the AC75 class was completely novel, so CFD was crucial for us to validate our design choices early on and be confident that the design would be physically feasible.” As the team worked to navigate the vast design space, simulation was an invaluable tool to help them to understand how their designs would behave on the water in all situations, irrespective of wind or sea conditions.

By simulating many different boat states (unique configurations of the boat including hull position, sail trim and rudder and foil angles), CFD data is used to feed the team’s Velocity Prediction Program (VPP), which predicts the boat speed under different conditions, crucially enabling designers to understand the relative merits of different designs.

“In CFD you can put the boat through many different scenarios which wouldn’t be easy to do with a model test or a fullscale boat test, like measuring slamming loads if the boat comes off the foils suddenly and the hull is thrown into the water,” says Starr “Pretty much everything that you will see externally on the boat will have gone through CFD simulation in some form or another.”

Those slamming loads were spectacularly demonstrated by American Magic in the earlier stages of the Prada Cup, in a capsizing incident that arguably cost them the series (and a much-coveted place in the America’s Cup).

Another challenge for the America’s Cup team is to accurately simulate the interactions between the aerodynamic and hydrodynamic forces acting on a vessel that is as much an aircraft as it is a boat. Whereas previous generations of engineers might have tried to simplify the engineering task by considering these phenomena separately, TEAM INEOS UK realise that embracing complexity is the only way to an optimal design.

“Our computational models got very complex, pretty quickly, and that neural network that helped us to understand how the boat will react to different conditions also got pretty complicated once you started taking things like the take-off of the boat from the water because they, obviously, they all start off in what we call ‘displacement mode’, which is when the boat is sitting on the water and moving through the water,” says Starr.

“And then you wanted to try and take off onto the wings as quickly as possible because when it’s up on the wings, on the hydrofoils, that’s the lowest drag through the water and so, that’s how you get the most speed. So, when the boat is in the water, you struggle to get to really high speeds just because you’ve got so much drag on the hull effectively.

“ Once the boat’s out of the water, the boat itself can go three, four times the wind speed of the wind that it’s going through because you’ve drastically reduced the amount of drag that the hull is going through and you still have a lot of drive going through the sails. “

“And so, you almost need a completely new computational model set for when the boat is now flying rather than when the boat is in the water because the responses and the dynamics of the boat are completely different. So then your digital twin has just had a whole other new model of complexity added to it.”

“You need to be cognizant of the different failure modes that can potentially manifest as you start pushing the weight down, so developing a high-fidelity finite element model at an early stage is key,” says Johnson. The issue here is not so much in generating an accurate simulation model, but in updating that model at the same pace as the rapidly evolving design.

“The ability to translate a model from one geometry to another is critical,” notes Jonson. “The parameterization of the model space allows us to morph our models very quickly from one concept to another or to substitute in a new concept easily. The Siemens toolset, with NX on the CAD side and Simcenter on the analysis side, make that a lot easier to deal with.”

LEARN MORE: Reducing optimization time from a day to less than an hour

Like so much at the pinnacle of sport, the real perspiration is the 10,000s of hours of preparation in getting to the start-line. Taking one of the most complex pieces of sporting equipment (the yacht) from a set of rules to a true flying machine in under 36 months so that the sailors can learn their part is truly a feat of outstanding engineering innovation.

Of course, in sport, the only real measure of success is victory, and INEOS TEAM UK face an uphill challenge, 4-0 down after the first weekend of racing. However, they have been in this situation before. After losing every the pre-Christmas warm up race INEOS TEAM UK bounced back in spectacular fashion in winning every race in the qualifying stages of the PRADA Cup. Given that the true measure of a digital twin is adaptability, we’ll see in the next few America’s Cup races just how successful their simulation strategy has been.

The Simcenter Amesim student edition gets revamped –… May 7, 2020 Download the new Simcenter Amesim Student Edition will give your access to a new set of capabilities by using the…
COVID-19 and CFD simulation for planes, trains and… January 6, 2021 Covid-19 CFD simulation The coronavirus (COVID-19) pandemic has spurred the global community into action unlike any other time in recent…
10 secrets to a stunningly fun CFD simulation November 20, 2020 What is the secret of those masterpieces of fun CFD simulations that inspire the masses?