Folks that have been around PCB design for many years or just a few have used many terms and descriptions for different aspects and features of design. Through the evolution of PCB design from the light table to the advanced CAD tools we now use, terms like ruby (for rubylith) and Bishop Graphics (tape, dots and stick-on decals) are now old-school. In this blog I thought it would be fun to share some PCB design terms, slang, or anything unusual we have heard. Be sure to share yours to the comments below. 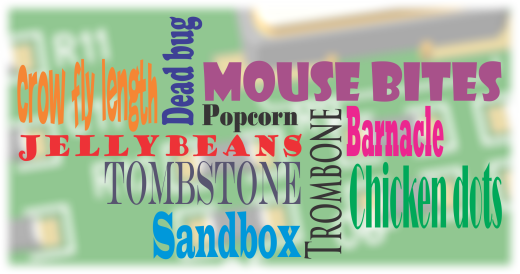 Mouse Bites – These are often an alternative to v-score for separating boards from panels. It is simply a number of drills that are close together on the board edge that creates a weak spot where the board(s) can be broken apart easily after fabrication. After the access board material or PCBs are broken off or apart, they leave what are often referred to as a “mouse bite” along the edge dots.

Chicken Dots – Typically seen in RF design, gold chicken dots give engineers something to stick ribbon bonds to. These artwork features do not affect the design, but facilitate tuning later. These were more commonly used before the accurate CAD tools came along are seen minimally today.

Crow Fly Length – Taken from the old saying “as the crow flies,” it is the shortest point-to-point connection as you see in the layout “rats nest” (hypotenuse of triangle). We typically design PCBs using the Manhattan length (sum of two sides of triangle) to optimize horizontal and vertical layer routing for designs.

Dead Bug – An oldie but a goody, this term applies most often when a through-hole chip was either pinned-out wrong or there is a component change. The part is de-soldered (or perhaps a new part) and it is glued upside down onto the PCB then wires are soldered from the legs to the appropriate connection points. The IC resembles a dead bug (picture a roach) flat on its back with its feet pointed up.

Jellybeans – This refers to components that are cheap like transistors, resistors, capacitors, diodes and made by lots of different manufacturers.

Popcorn – Another term commonly used for bulk resistors and capacitors. Today we refer to these commonplace, resistors, capacitors switches, and jumpers most often as passives.

Barnacle – Commonly used to describe a trace that has been cut, then a component like a resistor or capacitor that has been unexpectedly stuck/glued/soldered to the PCB, and then wires soldered to make connections. It has also been used to describe just a wire soldered from a cut trace to another point on the design. As you can imagine, barnacles are unexpected crustaceans for a PCB but not for the pylons on the beach pier. Even a complex sub-assembly or daughterboard may also be called barnacle by some.

Stuffed —Still common slang for a populated PCB with attached and soldered components. The opposite, unstuffed, is used to describe a PCB that has not had its components populated.

Spin – The process of laying out, routing, fabricating, populating, and testing a PC board. Each time a PCB must be revised and fabricated is typically called a”re-spin,” a term that isn’t limited to circuit boards or electronics. It is not uncommon to describe the first fab of a PCB as the “first spin,” even if nothing is re-done.

Matrix – Is a term used to describe an array or panelization of a PCB or PCBs, whichever seems to fit best. Most often “panel” is reserved for the standard-size laminate piece used by the PCB fabricator, whereas the word “panelization” indicates a method of designing an array of PCBs into a single processing piece for the PCB assembler.

Sandbox – Or sandboxes, usually carries a negative connotation. It refers to designers creating and using symbols or land patterns they’ve made and stored on their own, that is, outside of a component management system, not using their librarian, or a library flow they have created. The “sandbox” is typically the designer’s own bucket of parts created with a lack the oversight or the processes that an engineering design flow is put in place to avoid. Sandbox parts can create problems especially when they are not built correctly and can cost both time and money to fix.

Tombstone – When a surface-mount part is mounted standing up on one end, either by accident in solder reflow, or on purpose perhaps because the designer didn’t make proper artwork, it is said to be a tombstone.

Trombone – It is often necessary to add length into a net or a wire to achieve a predetermined time delay. For example, a phase shifter that uses a line stretcher to adjust transmission phase. Often there are two ways to do this: serpentine routing and “trombone” routing. These two methods may also be referred to as accordion and tuning.

White-wire – When you modify a printed circuit board using external wires, even if the PTFE jackets are not the color white (I often seen these in Blue-wire), it is called “white-wiring”. Typically white or blue-wire additions requires cutting a trace with an Xacto knife and a soldering iron to attach.

KGB (Known Good Board) – A board or assembly that is verified to be free of defects. Also known as a golden board.

ABCs of PCBs - O for ODB++ August 13, 2020 Welcome to ABCs of PCBs – a blog series to help new engineers learn about the world of Printed Circuit…
What a PCB designer needs today for schematic definition July 18, 2022 What’s really needed in a PCB design tool for schematic definition?  When I started out as an engineer, it was…
Create symbols and footprints for electronic components… January 11, 2021 In one of my last blogs I talked about using PartQuest to build up your PADS Professional component library.  I…

This article first appeared on the Siemens Digital Industries Software blog at https://blogs.sw.siemens.com/pads/2016/04/28/chicken-dots-mouse-bites-and-jellybeans/