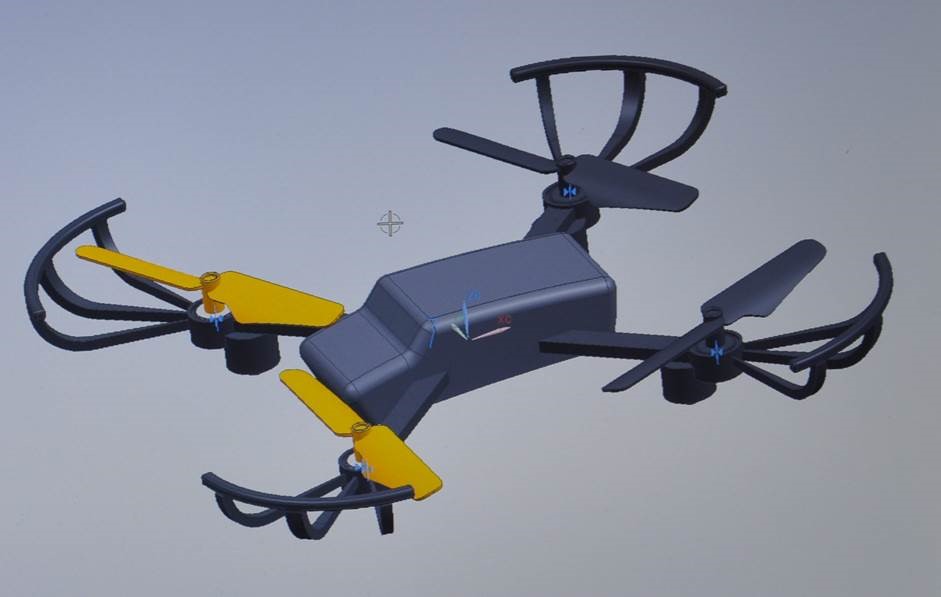 Stakes were high and competition was fierce but friendly at the 2017 Top Gun Competition that takes place annually at the PLM World Regional Users Group (RUG) in Detroit, Michigan. It’s a fun opportunity for both students and professionals to put their design skills to the test. Each year, contestants have one hour to model an object. It’s winner takes all – whoever is deemed to have the best model that meets the design criteria laid out by the judges (in this case, me and a rep from PLM World

) gets to keep the item as a prize. This year’s grand prize, the item which contestants had to successfully model within the 60 minute time limit, was a Vizo RTF FPV Camera Drone.

You could hear a pin drop in the room as all 6 contestants worked feverishly to complete their models in NX, only pausing to come to the front of the room for a better look at the details and intricacies of the drone they had to model. As far as what requirements the contestants had to meet, the following design criteria were taken into consideration in judging who would be the winner:


…and, of course, the finished model had to actually look like the drone.

It’s truly exciting to witness the modeling process in action and to see the different design approaches that individuals take. No one person designs exactly the same in NX, even when using the same best practices and design methodologies. While all of the models were done well, only one could reign supreme as the ultimate winner in each category: student and professional.

The winner in the student category was high school student Henry Jason. While Henry did not complete the entire model, the techniques he used and quality he was able to achieve was especially impressive. In the pro category, Kevin Line won for his complete and accurate representation of the drone and due to his use of color. He is a returning champion, as he won a previous year’s competition when the object was a Lego truck. Each were pleased to have been selected. To attend a local users group near you, check out the full list on the PLM World events page!

Community Spotlight: Candra Diningrat and the Bugatti Chiron… March 8, 2021 Meet Candra Diningrat. NX expert with a full design workflow of a Bugatti Chiron Pur Sport. This plus much much…
NEW: NX December release details December 11, 2020 The latest release of NX is here. See here to find out what's new to the world's most powerful and…
NEW: June NX Release Details June 21, 2021 Get in here to see what's new to the next generation of design!

This article first appeared on the Siemens Digital Industries Software blog at https://blogs.sw.siemens.com/nx-design/putting-design-skills-to-the-test-at-the-plm-world-top-gun-competition/