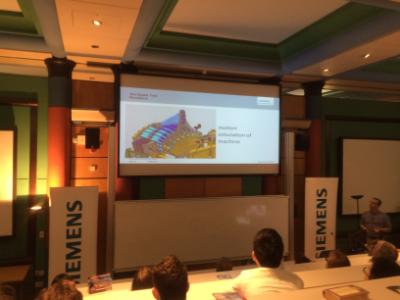 Few people understand or appreciate the fact that everything you see, touch, and hold (and even most things you don’t) originally began in a CAD system. A real living, breathing human designed them and—depending on the product—that person may have been you.

Conveying product complexity to the layman (or woman) can be difficult though. Have you ever tried to explain what you do to someone who is not “in the know”? If your experience was anything like mine, your attempt fell flat and your not-so-rapt audience was left staring at you blankly. It’s no small task to simplify the complexity of CAD into conversational tidbits that the average person can easily digest. Harder still is making the topic interesting… at least for those who don’t share your enthusiasm for the perfect blend.

Yet that is exactly what Hugh Newsam and Jon Rimmer managed to do for an audience of nearly a hundred during the Cambridge Science Festival.

Questions such as “How many parts were in the first Boeing 777?” or the more relatable “How many words are in the entire Harry Potter series?” served not just to engage the audience, but also to demonstrate the magnitude of developing and managing products. The first Boeing 777—which, not coincidentally, was the first ever aircraft to be designed entirely with CAD—had 3 million parts, while the Harry Potter series contains nearly 1.1 million words. Those numbers are significant enough to make even the most casual observer sit up and take notice.

From there, Jon and Hugh were able to delve into the meatier topics of the digital twin, virtual versus physical prototypes, and pulling it all together with NX.

They used numerous real-life examples to explain how an engineer like you uses NX to model, simulate, and validate a product from conception to completion. Audience members including university students and even children as young as 12 got to see firsthand how an engineer creates the mechanical components for a car. The Bloodhound car, in particular, drew a lot of attention for the unique challenges it faces. We won’t get into too much detail on the Bloodhound in this post, but it is essentially part racecar, part rocket ship with the goal to set a new land speed record of 1,000 mph. Look for a follow-up post coming soon if you’d like to learn more!

Jon and Hugh also explored the concept of digital twin. You no doubt have heard this term used a lot lately, and will continue to do so as it remains a key part of the future of manufacturing and product development in general. The digital twin is a virtual representation of a physical product that lives alongside it throughout the product lifecycle and beyond. The digital twin helps to conserve resources by reducing or eliminating altogether the need for physical prototypes. It’s no secret that a physical copy of a product takes time and money to create. Any design changes set you right back to square one in that process. The digital twin leads to higher efficiency and improved product quality (all of that extra time you save can be put toward improving the design, after all!).

You can’t have a digital twin without data though, and that is where things come full circle to tie in to the theme of this years’ Cambridge Science Festival which is, of course, Big Data! There’s another buzzword for you, but again, its popularity is not unfounded. As more products are brought into the digital realm, there is more information one can collect and use to better understand the world. Big Data deals with how to do precisely that.

This year marked the first time that Siemens has participated in the Cambridge Science Festival. The 14-day-long fair comprised 120 events including talks, exhibitions, demonstrations and hands-on, interactive experiences, all of which were dedicated to the latest research in science and math technology.

The point was not just to share the revolutionary changes coming out of science and tech, but also to ignite the spark of excitement that will lead future generations to pursue careers in science and be the next engineers.

So, what’s the takeaway for you? Well, the next time you find yourself struggling to explain to your spouse, child, friend or neighbor what exactly it is you do for a living, think back to the Cambridge Science Festival and remember these tips taken from Jon and Hugh’s presentation:

For more info on Siemens’ participation in the Cambridge Science Fair, read about it on our academic blog!

Configuring NX for Automatic Updates over LAN March 10, 2021 Welcome to this step by step guide by our NX expert Pat Mcmanus of Product Engineering Software here at Siemens.
Community Spotlight: Candra Diningrat and the Bugatti Chiron… March 8, 2021 Meet Candra Diningrat. NX expert with a full design workflow of a Bugatti Chiron Pur Sport. This plus much much…
NX Render Blog Series: The Visualization Process for Heavy… October 8, 2020 Enjoying the NX Render series? Register for this webinar on visualizing the Digital Twin for Heavy Equipment! Introduction As you…

This article first appeared on the Siemens Digital Industries Software blog at https://blogs.sw.siemens.com/nx-design/how-to-explain-cad-to-anyone-a-lesson-from-the-cambridge-science-festival/