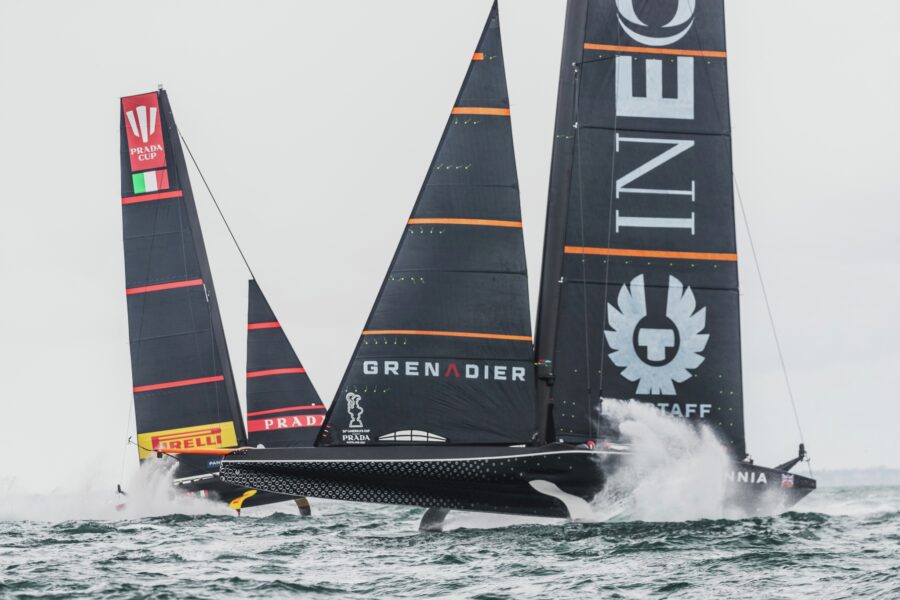 After the outstanding performance of British Challenger INEOS TEAM UK during the first set of the PRADA Cup round robin races, here is a little bit of Cup history and some additional resources on how Siemens Digital Industries Software solutions were used to develop Britannia, the British monohull currently ruling the waves.

A little bit of history

“Ah, Your Majesty, there is no second”. These words were supposedly spoken to Queen Victoria by her signal-master, in the afternoon of August 22nd, 1851. It was the day of the Royal Yacht Squadron (RYS)’s Annual Regatta around the Isle of Wight. To mark the occasion, the Marquess of Anglesey – wooden-legged Waterloo hero and one of the original member of the RYS – had donated a new trophy to the RYS, which he had just purchased for 100 guineas. There were 16 contestants: 15 British yachts and a singularity – an American schooner christened, quite simply, “America”. As the Queen and her consort waited, anxiously scanning the horizon for what would assuredly be one of the first British yachts, a single dot appeared in the distance. According to the legend, Queen Victoria asked, “Who is it in first place?”

– “I am sorry to report, Madam, it seems it is the yacht America”

– “Ah, Your Majesty… there is no second”

The ewer-shaped trophy was renamed the “America’s Cup” after the victorious yacht and gifted into trust to the winning team under a Deed of Gift defining it as “a perpetual challenge trophy to promote friendly competition among nations”. It was then taken to the USA, where it remained in the custody of the New York Yacht Club for more than 130 years. Although disputed many times, it wasn’t until 1987, when New Zealand finally defeated the New York Yacht Club, that the Cup left American soil. Since then, the Cup has travelled a few times between the US, New Zealand and Switzerland, but not once has it been brought back “home” to Great Britain.

Today, almost 170 years after that first race around the Isle of Wight, the America’s Cup has become the oldest international sporting trophy in the world, and the most expensive to win. Long gone are the cutters and schooners of 1851. The yachts today look nothing like the boats of yesteryear. But the essence of the Cup is unchanged: To win it is to demonstrate exceptional levels of both technical prowess and one-upmanship. Each boat is a marvel of technological expertise, a testament to the successful collaboration between the brightest minds in marine design and engineering and the best sailors in the world.

As per the Deed of Gift, the Class Rule (i.e the parameters governing the design, construction and operation of the yachts eligible to compete), is defined by the winner of the previous Cup – the Defender, in this case Emirates Team New Zealand – in collaboration with a foreign competing team – the Challenger of Record, in this case Luna Rossa. As a result, no two America’s Cup campaigns are ever the same. This year, the AC75 Class Rule has introduced some ground-breaking regulations. Not only has the type of craft changed dramatically, from multihull catamaran with wingsails to fixed-configuration monohull with soft sails, but new limitations on prototyping and physical testing were introduced, compelling teams to fully rely on digital tools to develop their boat.

Led by Sir Ben Ainslie, a previous America’s Cup winner and the most successful Olympic sailor of all times, INEOS TEAM UK was formed in 2018 to bring the America’s Cup home to Britain. With digital technologies playing such a critical role in the development of their racing boat Britannia, the British Challenger chose to partner with Siemens Digital Industries Software.

One unusual initiative Sir Ben took at the start of the project was to train the sailors in the digital technologies used by the design engineers. By doing so, he wanted to break down the silos that often exist between design and sailing teams, and build a connection that would enable both sides to better understand each other, speak the same language, and as a result work in better synergy. You can learn more by watching the video here.

Here are a few resources, should you wish to learn more about the use of Siemens software by INEOS TEAM UK:

We wish INEOS TEAM UK a continued flying performance for the second set of round robin races next weekend!

An ode to summers past, present and future… July 1, 2020 Cox Marine is out to change the way we think about the marine industry. The new CXO300 outboard engine is…
Sail away this summer with our Marine on-demand webinars August 14, 2020 Did your long-awaited seaside holidays get cancelled? Do you wish you were sitting on a sandy beach, sipping a piña…
Procurement, early design and digitalization in the… August 11, 2020 New challenges don’t always need new solutions. It is fascinating to see how different businesses have been dealing with the…