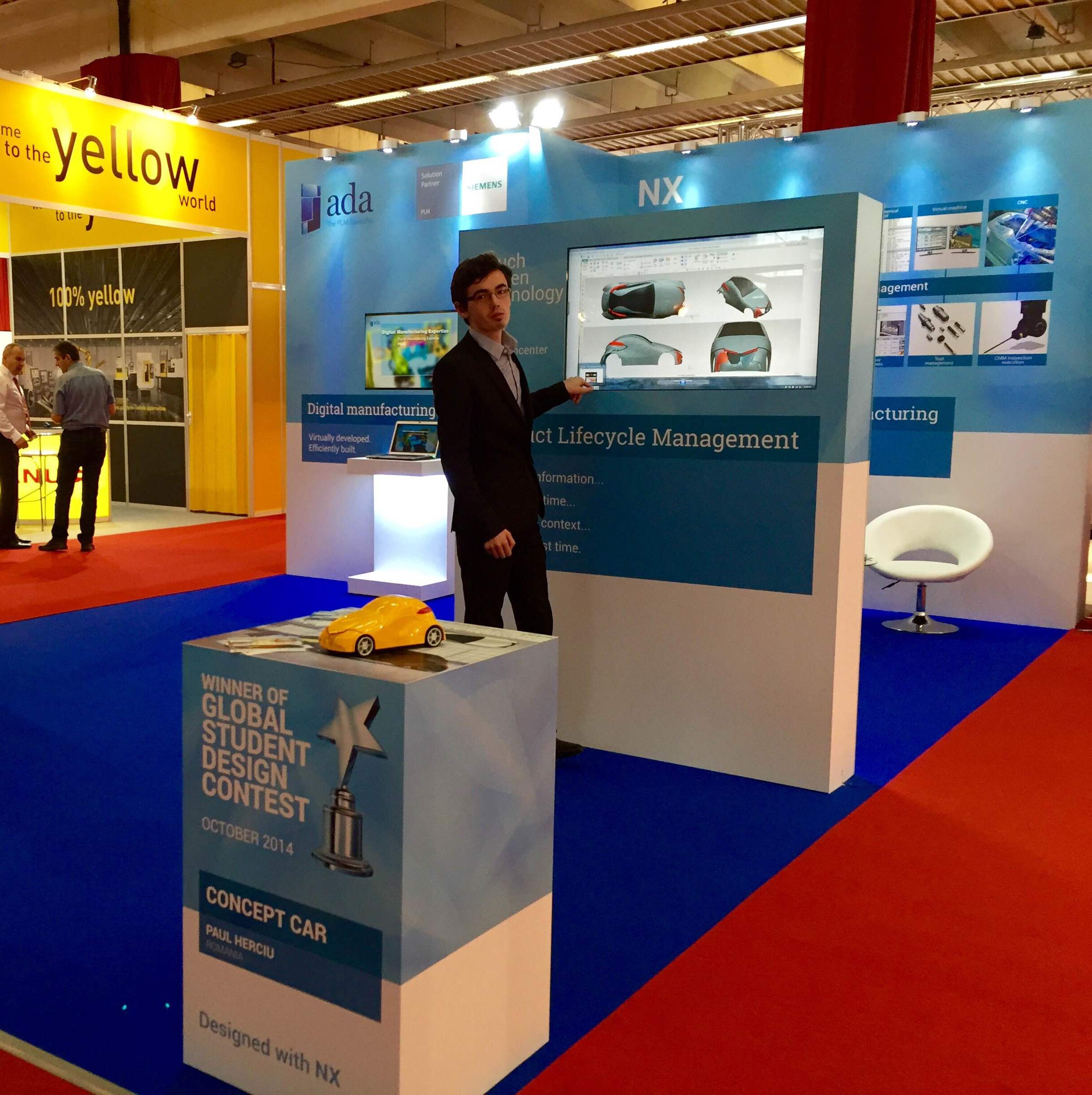 Our global Student Design Competition has been unearthing such great new talent over the last few months, its such a delight to share with you some of the recent winners! We’ve even had U.S Student Charles Roos from Utah State University make the local FOX News when he was recongnised as a winner for his design of a Steam Engine created in Solid Edge. Check out the links at the bottom of this article to read more about this story and other student winners!

We have had entries from all over the world with a strong interest from students across EMEA. The competiton is open to any student who can submit an image designed in either NX or Solid Edge.

Meet Paul Herciu, he is a graduate with a degree in ‘ Economic Engineering with a speciality of Mechanics’ from ‘Vasile Alecsandri’ University of Bacău. He designed a concept car (showcased in the background of the photo above) with a futuristic feel. The main challenge he faced was designing the surfaces ‘it was important that the surfaces be tangents and it’s a little tough if you don’t have a contact before with surfaces’ states Paul, adding that another challenge he faced was ‘the project be to a real scale.Human modeling feature with driving posture helped me to have all proportional components’. He used both ‘Studio Spline’ & ‘Studio Surface’ both features of NX for his project. When we asked him if would recommend using NX to another student his answer was:

‘Absolutely. I am NX fan! It’s a complete software, very intuitive and any idea you have, the results can be produced in a short time.’

When Paul found out he had won the competition he was invited by Siemens PLM Channel Partner in Romania ADA Computers so they could present him with his prize and certificate. The folks at ADA were so impressed with Paul and his skills ‘We had the pleasure to discover a young genius during his visit to our office!’ says Laurentiu Nae, Sales Director at ADA that they offered him a job on the spot! Paul accepted and is now working in Pre-Sales for them.

ADA are so proud of their new member of the team they highlighted his achievements at their stand at the Demometal Expo in Romania!

How fanastic is that?! Double congratulations to Paul for winning the contest and finding a great new job & to ADA for recruiting such a talented new member of the team!

Enjoyed reading this story about Paul? Read more about other fresh talent we have found through our other student design winners:

This article first appeared on the Siemens Digital Industries Software blog at https://blogs.sw.siemens.com/academic/student-from-romania-not-only-wins-student-design-contest-but-lands-a-new-job-too/